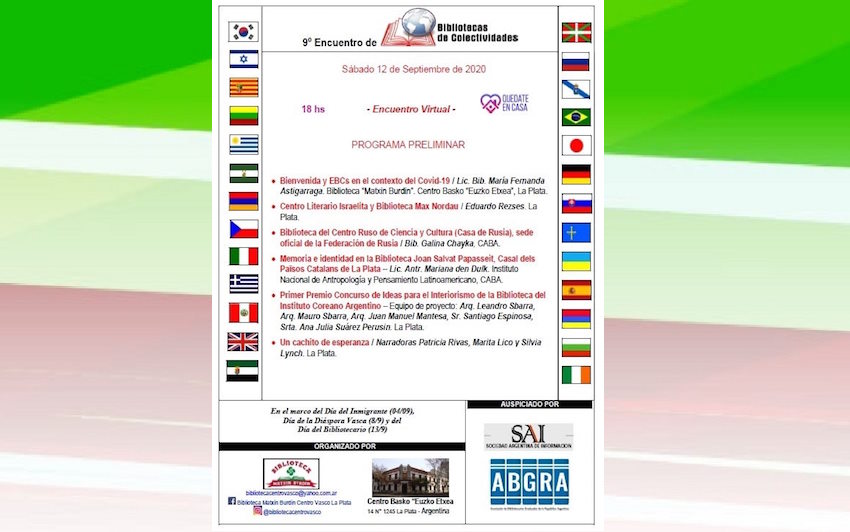 The program of the 9th Meeting of Community Libraries this Saturday

La Plata, Argentina. In the context of the pandemic, the organization and hotsing of the meeting became a challenge.  This year, in its 9th edition, it will be held virtually on zoom and will include the participation of the Basque, Israeli, Korean, Russian, Catalan and Japanese communities. The meeting will begin at 6pm with a welcome from the organizing librarian, followed by 15 minute presentations according to the following program:

-Presentation of the Russian Center of Science and Culture Library (Russian House), official headquarter of the Russian Federation
by librarian Galina Chayka, CABA.

-“A Piece of Hope,”
By narrators, Patricia Rivas, Marita Lico and Silvia Lynch from La Plata.

-20 years of the the His Imperial Highness Prince Akishino Library”
by librarians Leonardo Blanco and Diego Higa from the Argentine-Japanese Nichia Gakuin Cultural Center College, CABA.

As in prior editions, the meeting is aimed at librarians, researchers, members of institutions of various communities and also at the general public.  Prior enrollment is not required, but spots are limited to 100, first come first served.  Attendees will be asked to enter with their camera on, with the audio turned off, and to introduce themselves in the chat: name, library or community to which they belong.

The call has generated great expectations to "be able to enjoy this new meeting opportunity that will allow us to meet new libraries and perhaps also people from other places, that virtually allows us to approach and participate," librarian and organizer,.María Fernanda Astigarraga told Euskalkultura.eus.

The Meeting of Libraries of Communities is sponsored by the Association of Graduate Librarians of the Argentine Republic (ABGRA) and the Argentine Information Society (SAI).