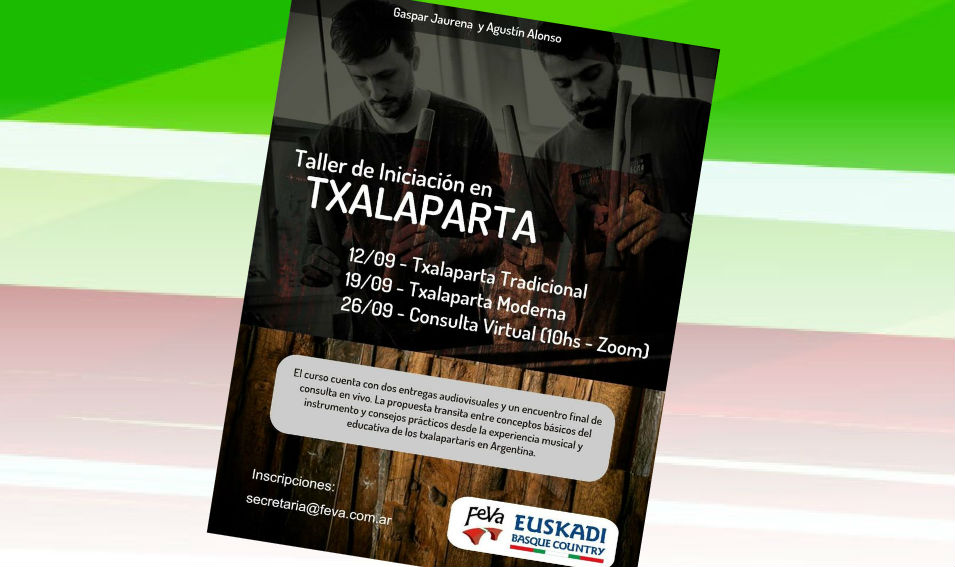 Buenos Aires, Argentina. Beginning tomorrow, Saturday, September 12th and running through the next two Saturdays there will be a Txalaparta workshop taught by musicians Gaspar Jaurena and Agustin Alonso as part of FEVA’s cultural offerings, that will take place on line, as it has happened with many other FEVA workshops, meetings and activities since preventive and compulsory isolation began.

The two installments on Traditional Txalaparta and Modern Txalaparta respectively, will take place audio/visually.  On Saturday the 26th, however, there will be a meeting for advice on Zoom at 10am.  You can enroll by emailing secretaría@feva.com.ar.

Continuing with the diffusion of traditional Basque instruments, FEVA has also organized a workshop on Basque flutes (txistu and txirula), this time taught by Fernando Zabalza, Santiago Chamorro and Noe Fernandez, also musicians from the Gerora Basque Association in Cordoba.  The workshop will be on October 17th during three different time periods to facilitate participation.

The aforementioned musicians all take part in the Lurra eta Haizea (Earth and Wind) workshop hosted by the Gerora Association in Cordoba and were also part of the Baietz group, a pioneering group of Basque Argentine musicians.  It should be noted that these musicians are self-taught musicians regarding the  Basque instruments they play and that in many cases they made, little known in Argentina.