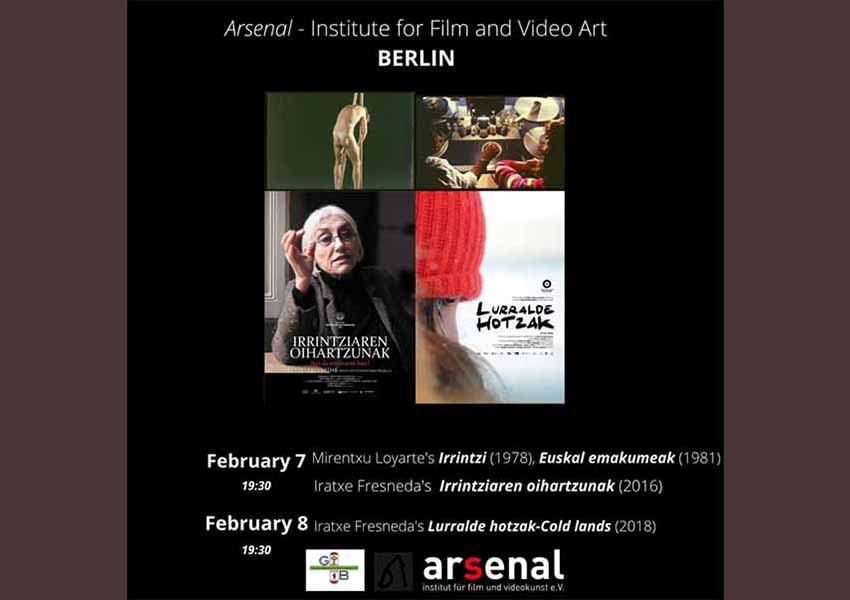 Berlin, Germany. Two female filmmakers of different generations and their films will be the stars this Friday and Saturday at the Arsenal Institute of Film and Video Art in Berlin.  Mirentxu Loyarte is 83, and was a female pioneer in Basque film.  She is visiting Berlin with her two works “Irrintzi” (1978), and “Euskal emakumeak,” (Basque Women) (Ikuska, 12) (1981).  The program will also include a screening of “Irrintziaren oihartzunak” (Irrintzi Echoes) (2016) and “Lurralde Hotzak” (Cold Country) (2018), by Iratxe Fresneda. Both filmmakers will participate in a colloquium moderated by Petra Palmer.

From the Berlin Basque Club, Aihnoa Añorga, club president, stressed her satisfaction, noting that “we are very happy because these two women filmmakers from two different generations, were both able to visit us.” “Mirentxu also let us know how happy it made her to know we were showing her works in Berlin.  What is certain is that we were able to show 'Irrintziaren Oihartzunak,' in our festival a couple of years ago, that film that tells her story, and it is going very special for us to meet her in person.

“We are rounding out the program including the participation of Iratxe Fresneda, in fact Saturday’s screening with the German debut of her “Lurralde hotzak,” the Euskal Etxea of Berlin’s president explained.

Mendizabal and Mattin, and Elías Querejeta

Remember that last Friday Basque musicians and artists Alex Mendizabal and Mattin performed a concert at KM28 in Berlin. The club also let us know us about its Retrospective of Elías Querejeta in March in Zeughaus.