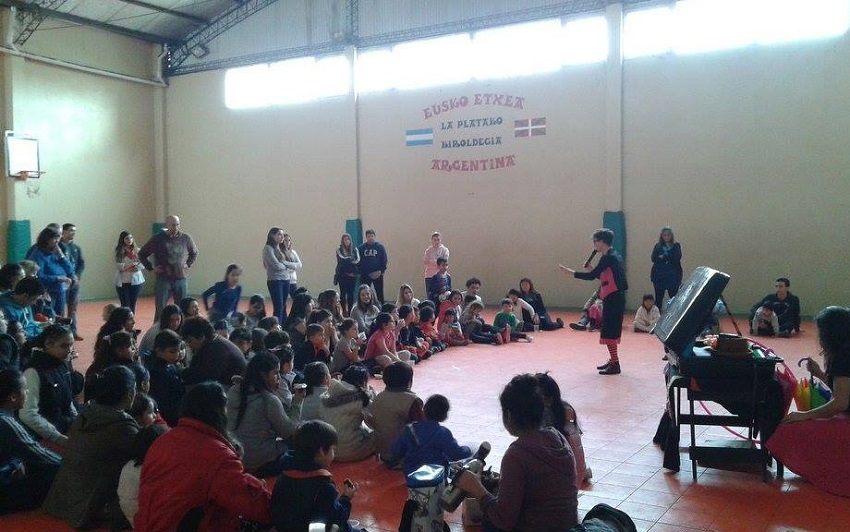 Images of the mural need to reflect what it means to “be Basque” and/or what it means to the community.  The work will be completed by students in Fine Arts at the National University of La Plata, but members and friends are also invited to participate in choosing the design. The club has uploaded a survey on its Facebook page to choose from various designs that include the Tree of Gernika, the Ikurriña, the Lauburu and San Fermin Festivities to mention a few.

La Plata, Argentina. Euzko Etxea, along with the Chair of Muralism at the College of Fine Arts at the National University of La Plata, are developing a project that hopes to create a mural on the facade of the club’s headquarters. The work will cover the space that exists between the clubhouse’s first construction that looks like a farmhouse (corner of 58 and 14 streets), and the expansion done in 2004 (14 Street between 57 and 58).

Even if the design of the mural will be done by the college, the club still invites everyone to participate in choosing the design by filling out their survey. The survey includes twelve typical Basque symbols like the Tree of Gernika, Picasso’s “Guernica,” a lauburu, an Ikurriña, dantzaris, pilota, a txapela, a map of Euskal Herria, Basque dairymen, San Fermin, gastronomy and a bota. You can also propose things that do not appear on the list. The survey is located on the club’s Facebook page Centro Basko Euzko Etxea or simply by clicking here.

Lately, the club in La Plata has been involved in two conflicts that have brought on more than one headache, but they could be closer to a resolution. In the case that the club faces with the former concessionaires at the club’s restaurant, who after leaving the club continued to use the name “Basque Club Restaurant.” In August a ruling was made condemning the restaurant's owner to pay a large fine. “Even if it can be appealed, to our regret, it is also a favorable resolution in this first instance,” club sources said.

At the same time, in the case of the city’s land and City bell, where the club’s Athletic fields are, the project aimed at having the land becoming the club’s definitive property still is awaiting Senate approval. Remember that this land was transferred for a period of ten years to be used by Euzko Etxea. The loan expires this year and the club has presented a project to create a sports complex in the area without vegetation, as well as a public park in the dense mountain of eucalyptus that stretches for 50 hectares.

“On August 3, we welcomed the visit of Senator Juan Pablo Allan, and Senator Pilar Aylion, the Deputy Diego Rovella, Councilman Guillermo Ronga and the director of Municipal Communities, Damian Morel. The project is moving along but it still needs the approval of half of the Senate,” club sources said.

These situations do not in any way tarnish the good spirit with which the club carries out its annual program of activities and that is why the events are being carried out in complete normality. In August both scheduled events Saint Ignatius and Children’s Day were held very successfully.