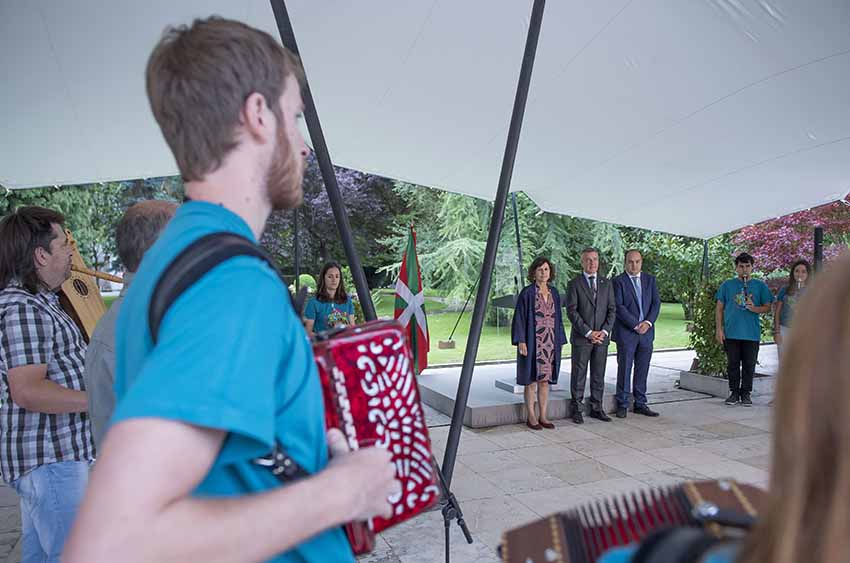 These youth belong to Basque clubs around the world and are currently in Euskadi participating in Gaztemundu 2017, a Basque Government program that provides training to youth in the Diaspora.  This year’s edition is dedicated to music and Basque instruments.  In his welcoming words, Urkullu thanked the youth for maintaining the link and Basque feeling “Euskaltasuna,” and he spoke of music as “an essential expression of the culture of our people.”

Vitoria-Gasteiz.   The Lehendakari’s reception for the Gaztemundu participants took place in the gardens of Ajuria-Enea.  Those accompanying him were the Secretary General of Foreign Action, Marian Elorza, and the Director of Basque Communities Abroad, Gorka Alvarez Aranburu. This year fourteen youth belong tol Basque clubs in Argentina, Chile, and Uruguay, and all are involved in music and play a traditional Basque instrument.  Specifically yesterday, the sounds of the txistu, trikitixa, pandero, and alboka were heard among others (txirula, ttunttuna…) in the small performance they did for the Lehendakari.

Gaztemundu began in its current version in 1996.  Today the program runs for two weeks in the Basque Country and gathers youth annually around different themes as suggested by the World Congresses of Basque Collectivities that take place every four years.  Last year’s program was dedicated to chefs and Basque gastronomy, while this year’s is dedicated to Basque instruments, while on other occasions, the focus has been Basque dance, or Basque club organization and management.

Video of yesterday’s visit to Ajuria Enea, included in the second part of Lehendakari Urkullu’s address in Euskera and Spanish to the Gaztemundu participants (image Irekia):

This year’s Gaztemundu program is based in Vitoria-Gasteiz, and classes are being taught at the local Musika Etxea, with an important team of professors specialized in Basque music and instruments.  Participants will also go on several outings to various places all over the Basque Country in order to contemplate or experience certain cultural events first hand during their stay.  This year’s program will conclude next weekend after an experience that the participants will soon not forget.  An experience on the other side of the ocean, the fruits of which will be enjoyed in their respective Basque clubs, dance groups and other musical activities that each organizes in their communities.