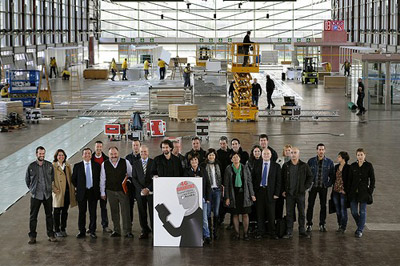 Stands are already going up in the Landako pavilion since it will once again be the scene for Durango’s book and record fair. The fair will become the cultural epicenter of Euskal Herria during those five days with the latest from the publishing and record worlds being presented: 313 books, 63 records, 23 magazines, 9 videos, 15 electronic books and another 11 publications. For those who can’t attend in person all fair activity can be followed through social media, and also via your cell phone thanks to a new app called, “Kulturize.”

Durango, Bizkaia.  Durango’s Basque Book and Record Fair will gather Basques from all seven provinces, and some from the Diaspora from December 4-8, at a vital Basque cultural event.  Four hundred thirty four new items, two hundred seventy four stands; even though 9 fewer than before, it should be noted that this year there are 13 more stands of businesses or technological entities.

According to fair organizer, Gerediaga, at its press conference, 138 entities will participate this year in the 46th edition between publishers, record labels, groups, associations and institutions.

The fair will include three new areas this year.  The first, “Irudienea,” will showcase Basque audiovisual production. The second, called “Szenatokia,” will be a center of meetings between Basque theater and its audience; and the third, “Kabi@,” will showcase new projects and products created online and technological support.   Between these three areas, the hall of children’s literature and the “Ahotsenea” area, two hundred activities will take place.

As in other years, the fair will be featured on social media and daily updates can also be accessed on Facebook and Twitter. In addition, this year’s Azoka is featuring a novelty with a new cell phone app called “Kulturize Azoka Edition" that will allow users to receive information on what is going on at the fair directly their devices.

The prize awarded annually to those who have dedicated themselves to the promotion of Basque culture will be presented this year to Iñaki Beobide from Donostia, founder of the Herri Gogoa record label that has produced the works of many Basque groups between 1967 and 1981.

Finally, this year’s guest culture is Galician, and the Gerediaga Elkartea has organized a series of events featuring Galician artists, in cooperation with the Culturgal Association.  Singer and producer Anton Reixa, will give a talk entitled, “We are all Galicia,” among other activities.