Carolina Minaberry: “I am very connected to Argentina, although when I visit Euskadi, I feel a happiness that is difficult to express” 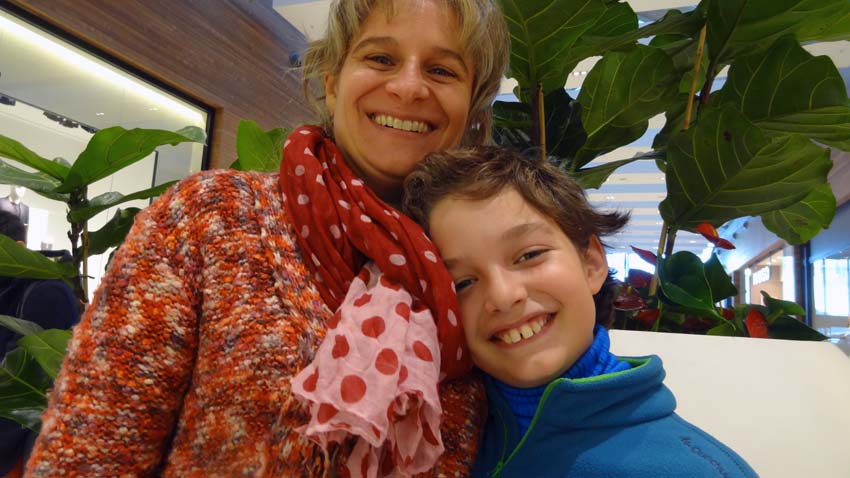 Carolina Minaberry with her son Unai during their recent trip to Euskadi (photo EuskalKultura.com)

Basque-Argentine Psychologist, born in Lincoln in the Province of Buenos Aires, Carolina Minaberry was in the Euskadi recently, remembering the time when she came to study Basque and pass the EGA, and was asked to teach classes to Basque natives.

Joseba Etxarri.   Carolina is 47 years old and has returned to Euskadi for a few days with her son Unai, who was born in Baiona, in the middle of her four-year stay from 2002 to 2006, after which she returned to Argentina when Unai was only 9 months old. “That was ten years ago and he wanted to come, get to know the country where he was born and visit family and friends.  Unai is the only one of her children to be born here, since his older brothers, Asier (20) and Imanol (17) were both born in the capital.”  “He has enjoyed it and it has been very exciting, and he is happy.”

You were born in Lincoln, in the Province of Buenos Aires, initially without any contact to the Basque community or your Basque origins.

-Until the age of 11, when i started travelling to the Basque Country and the US to visit my father, Martin Minaberry. He was from Ortzaize-Osses and he lived the most of his life in California. Aita (dad) was very involved in the US Basque clubs and with NABO, where he did much cultural work as well as worked in the world of pelota, a sport that he was a great promoter of.  During the trips, I eventually learned French, but my father and his family mainly spoke to each other in Basque and I wanted to understand!  That is why when I was 18, when I graduated from high school, I decided to take a year off and put off my university studies to learn it.  I applied for a scholarship from the Basque Government and that sent me to a barnetegi in Hondarribia and Lazkao.  I have wonderful memories of that time.  I didn’t know one word when I started but I knew that studying it in an immersion situation would be the easiest and fastest way to learn.  You learn or you learn, there is no other option (laughs).

Until then you didn’t have any relationship with the world of Basque clubs.

-None.  In Lincoln there isn’t a Basque club and I became aware of them much later, after learning Basque.  When I returned to Argentina I studied Psychology at the University of Buenos Aires and I also started teaching Basque classesin Buenos Aires at the Euskaltzaleak association and at the Junin Basque club.  I got in touch with the Argentinan Euskaraz program and I continued studying and improving my Basque, all while I was teaching it.  I taught classes for 11 years at Euskaltzaleak, until 2002 when my husband and I decided to spend some time with our sons in the Basque Country, in Angelu-Anglet (Lapurdi)…

…where there you tought Basque natives Euskera…

-I joined AEK [an association to teach Basque] and I taught classes in Angelu and Biarritz.  I also taught adults at the Angeluko Ikasleak, and taught children at a private bilingual school, at Sacre Coeur in Baiona and Stella Maris in Angelu.  People were surprised that someone from Argentina would be their teacher, being themselves from here, or at least living here.  I think that for them it was proof that despite its reputation, Euskera is like anything, and can be learned. Finding out that little by little things can be achieved, if there is a will and enough dedication.

You got the EGA proficiency title in Basque.

-I made that a goal in 2002 and when I achieved it in July of 2003, I couldn’t believe it.  Learning Basque has been very important and very gratifying for me.  I did it to be able to talk to my father in his mother tongue, it was also a more natural and afective way for him to communicate with me.  It was a beautiful experience to share with my father’s family, to immerse myself in this cultural environment that is also part of me.

How do you feel regarding being Basque and Argentine?

-I am very connected to Argentina.  I was born there and my family mother's side is there, they are mainly Italian.  I have always felt a bit divided, because I belong to both worlds.  The idea would be to live in Argentina and travel right away to the Basque Country, because when I see its landscapes, hear its music, participate in its cultural events or speak Basque, I feel something palpitate in me, something that brings me great happiness that is difficult to express.