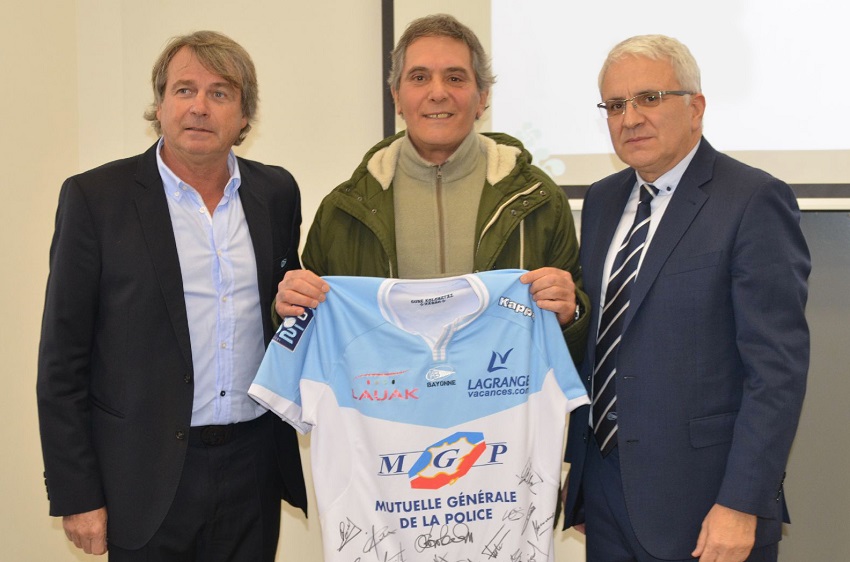 The Aviron Bayonnais jersey will soon be worn in Argentina. In the photo, on either side Francis Salagoity and Christian Deveze, presidents of the club and in the middle Javier Clua, president of the Euzko Etxea in La Plata.

The agreement includes, among other points, the authorization of the Children’s Rugby School at the Basque club to use the official jersey and the logo of the club in Iparralde.  In the same way, and looking to the future, it also includes the exchange of young athletes between both entities.  Along with this news, the Basque Argentine club also announced an exhibition of all the activities that it organizes.

La Plata, Argentina.   The local Basque club in La Plata holds sports very dear.  Not only Basque pelota, in its various modalities that is played at the club’s fronton, but it also has soccer, hockey and rugby teams.

In hopes of taking the club’s sports a step further, club president, Javier Clua signed an agreement on March 11 with the president of the Aviron Bayonnais Rugby Club, Francis Salagoity, to allow the Children’s Rugby School at the Euzko Etxea to use the team’s jersey and logo.  The agreement also includes the potential for youth exchanges between the two entities.

The agreement was signed at the Jean Gudier Stadium in Baiona, and was attended by local mayor, Jean Rene Etchegaray; the presidents of Aviron Bayonnais, Christian Deveze as well as aforementioned Francis Salagoity; along with the president of the Basque Federation of Rugby, Iñaki Laskurain.

Before signing the agreement the Vice-Minister of Linguistic Policy in the Basque Government, Patxi Baztarrika, presented a Basque Dictionary of Rugby Terms that includes terminology phrases specific to the sport and recommended appropriate application sin in Basque.  The dictionary can be consulted here.

In other news, the exhibit “In the Footsteps of Euskera. The Basque Language and its Presence in Argentina,” will be open in La Plata to the public from April 8-17.  The exhibit was created by the Delegation of Euskadi in Argentina and Mercosur, with the collaboration of HABE and FEVA.  The panels will be located in Room A o f the Islas Malvinas Cultural Center.

To complement the exhibit, the Basque club is also preparing an exhibition of all the activities that the club carries out.  The program will be varied and will include dancing, language, choir, library, pelota, and hockey, soccer for the blind and children’s soccer, among others. The event will be held on April 16 from 14-17pm at the Plaza at the Islas Malvinas Cultural Center 50 street between 19 and 20.