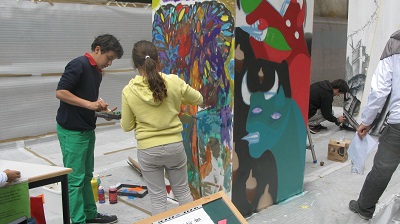 For the last few weeks the Euskal Etxea in Berlin has hosted numerous activities commemorating the Bombing of Gernika that celebrates its 75 anniversary this year. The Basque club has also involved locals in this endeavor who have participated in several events. An example was a tribute that took place at the Guernica Plaza where many became emotional at the reading of a letter from a young girl from Gernika. The closing event was also attended by many who helped paint Peace Graffiti, a reinterpretation of Picasso’s “Guernica” by five Basque and German artists.

Berlin, Germany.  The Euskal Etxea in Berlin has dedicated itself, over the last few weeks, to the 75 anniversary of the Bombing of Gernika with a complete program of activities commemorating the tragedy.  The closing event took place on June 1 as part of the Open-Air festival that took place on Donasutrasse Street on Children’s Day.  Thanks to the Euskal Etxea, five artists (three from Gernika and 2 from Germany) painted a graffiti on the street; a reinterpretation of Pablo Picasso’s famous “Guernica.”

They began to paint “Peace Graffiti” first thing in the morning and throughout the day they were joined by neighbors and students from a nearby school who helped.  The Graffiti was painted on six wooden murals, with the sixth being done by neighbors and the students of the Rixdorf School.

“We also did games and puzzles with which we told the story of what happened in Gernika 75 years ago,” said Ainhoa Añorga, club president.  “The organizers were very satisfied with the event as well with the response it received in the Neukolin neighborhood.  The Graffitti will be displayed now at the town hall, and then this summer it will be installed in a hof, or a patio, in the neighborhood so that those living in the area can enjoy it.”

Emotion at the Guernica Platz

Among the activities commemorating the 75 anniversary of the Bombing, Añorga especially recalls the event that took place on April 26, on the same day and at the same time of the attack at the Guernica Platz in Berlin.  “The night before we received an emotional letter from a young girl from Gernika, who thanked us for what we were doing and which said that on that day the people in both places would be united.  We translated the letter and I read it out loud in the plaza and people were really touched and many of them came and thanked us,” she recalled.

On the same day, in the morning, the Euskal Etxea organized a screening of the documentary Gernika by Klaus Ihlau, for the sixth grade class at the Sternberg School.  During the week the students studied the topic with materials prepared by the Basque club and they watched the documentary with much interest.