South American Diaspora celebrated San Fermin on the beach, in the streets, in church and in their clubhouses 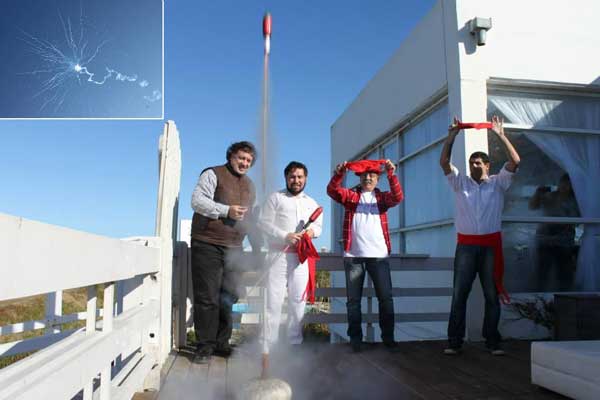 Another edition of San Fermin has concluded in Pamplona and around the world. As every year, Basque and Navarran clubs throughout the Diaspora participated in the event following it from afar with various activities. In South America, the festival was celebrated on both sides of the Andes and after the festivities the clubs are evaluating their celebrations. EuskalKultura.com is taking another tour of San Fermin through Argentina and Chile.

Buenos Aires, Argentina.  Joy and sadness.  Joy because the festivities went as planned.  Sadness because now we have to wait another year to once again yell, “Gora San Fermin!” With these contradicting sentiments, Navarran and Basque centers in Argentina and Chile said farewell to San Fermin 2013.  But there is a way to make the wait until next year’s event not as long, and that is to relive the festivities through photos and videos. [The Navarran club in Chile celebrated San Fermin on July 7.  The festival was in two parts.  In the morning Fr. Alfredo Calvo celebrated mass in the chapel of the Virgin of Covadonga, with the participation of the choir of the Rioja Collectivity in Chile.  Following nearly 100 people gathered in the Spanish Stadium of Las Condes to share lunch (photos www.eespanol.cl)] [Moving on to Argentina and the Navarran Center in Bolivar the festivities took place over two weekends.  The first saw a Mus championship and dinner and the second mass and a chocolateada.  Club dancers were present at all events (photosCN)] [In the Navarran Club in Buenos Aires there were many activities between July 5-7.  There was a pilota exhibition, an afternoon of chocolatada, dances, videos and games, and the traditional San Fermin banquet.  On Sunday the 7th, before lunch, a rocket was launched from the door of the clubhouse (photosCN)] [Members and friends of the Navarran club in Mar del Plata celebrated San Fermin in great weather with the sun was more than welcome with the festivities taking place on the beach.  The launching of the rocket marked the beginning of the celebration that included dancing, paella and a musical show (photosCN)] [At the foot of the Anders, the Navarran club in Mendoza also joined in the San Fermin festivities and did it with lunch on Sunday, July 7 at the Feria de Guaymallen room and mass on Friday the 12, at the Cathedral of Our Lady of Loreto.  The festivities continued with a peña, with bull and everything as seen in the picture (photosCN)] [As every year, the Navarran Center in Rosario prepared a wide range of activities that began on July 5 and concluded on the following Saturday with a Pilota Tournament.  Other activities included: Mus tournaments, music and dance performances, parades, dinners and camaraderie also took place (photo CN)] [And from Ayacucho, in the province of Buenos Aires, another version of San Fermin has come to our attention.  Thanks to the Euskal Odola Basque club founded by Navarran from both sides of the Pyrenees, the celebration took place on Sunday the 14th beginning with “Joyful Awakening” ceremony by the dancers as a tribute to the older members of the community.  Those honored this year include: Justo Jose Echeverria Olano, Juan Ignacio Echeverria Olano, María Nilda Ilarregui Mandacen and Mariana Iribarren Etchart.  Following the local dancers, along with their counterparts from Tandil, participated in mass officiated by Fr. Miguel angel Paris and later they performed a dance exhibition in front of the church.  The program ended with lunch at the clubhouse (photoEE)]