Are you going to celebrate Basque Diaspora Day on September 8th? Make sure your event is part of the world program 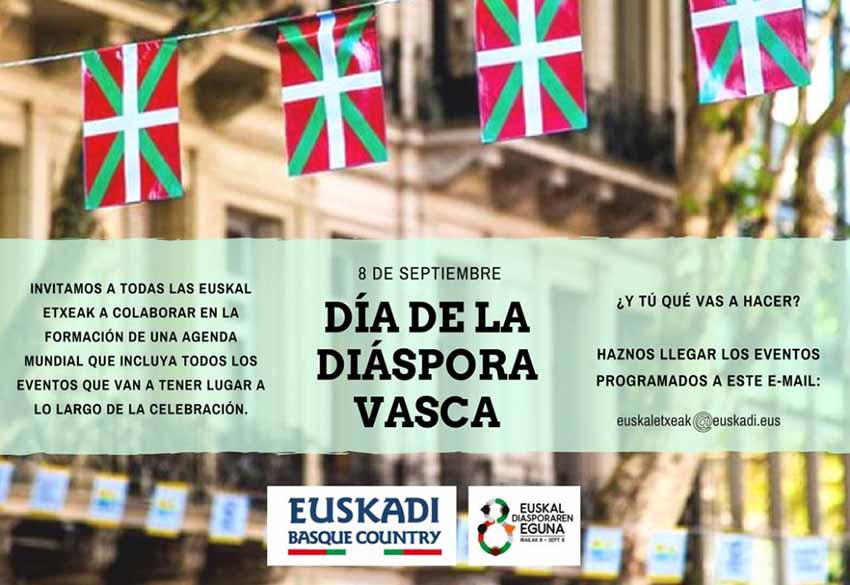 Donostia-San Sebastián. Basque Diaspora Day is celebrated around the world on September 8th.  This is a day when Basque clubs and Basques all over the world say “Present,” and claim the past, present and future role that Basques in the so-called Eighth Province have played, and continue to play as part of Euskal Herria and the global Basque reality.

Last year’s celebration was proof that there is a wish in the Basque Diaspora to vindicate its reality as members and contributors to Euskal Herria, and the Basque world. This despite the fact that there is a gap and a deficit in the knowledge, and recognition of the constant in Basque history, which has been the presence, contribution and interaction of Basques wherever they were, with their language, culture and their homeland.

In several places in the Diaspora this deficit is sadly perceived and it is considered that Euskal Herria owes a great debt that should be paid as soon as possible, facilitating information and knowledge about this other Basque reality that is made up of its sons and daughters spread all over the world.

If your Basque club is going to organize an event, a toast, a cocktail, publish an article in the press, a TV interview, organize a commemorative event on that day, have a meal, a concert, dance, a festival, a solemn act, show a film…whatever it might be, the Basque Government requests that you write them and let them know the details of the event, so that it can be included in the world program of events to be published.

Here is the request from Gorka Alvarez Aranburu, Directof of the Basque Communty Abroad.

You can email the information to euskaletxeak@euskadi.eus.: