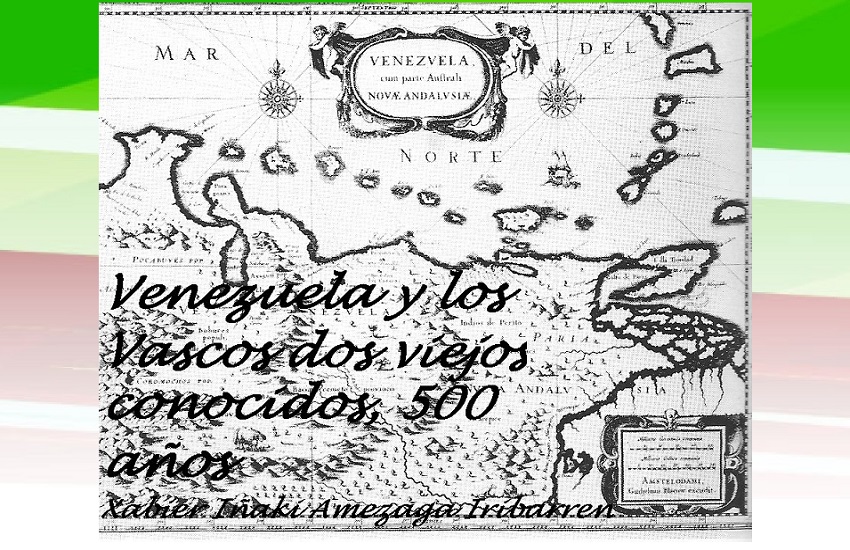 Cover of the book “Venezuela and the Basques Two Old Acquaintances, 500 Years”

Caracas, Venezuela. Many of our readers are enjoying summer, usually a good time for reading.  Here is a title and author, for those who would like to learn more about the Diaspora, specifically in Venezuela.  Xabier Iñaki Amezaga Iribarren was the youngest son of Amezaga’tar Bingen, of Dr. Vicente Amezaga Aresti, originally from Algorta, a big Euskaltzale and prolific author and translator who arrived in exile to South America in 1942. After staying in Buenos Aires and Montevideo, he settled in Venezuela where he lived until his death in 1969.   As a tribute to the land that welcomed his father, and to introduce the Basque Diaspora in the Caribbean Country, Xabier Amezaga published Venezuela y los vascos dos viejos conocidos, 500 años (Venezuela and the Basques Two Old Acquaintances, 500 Years), last June.  The book, with an expanded edition coming at the end of bthe year, can be downloaded and enjoyed for free at this link.

The book on Venezuelan Basques, however, is not the only publication dedicated to our Diaspora by Amezaga, creator of Xamezaga Publishing, a non-profit organization that according to the author includes, “The most extensive reference in Diasporic Issues,” in some 900 works.  Among these works is the entire production of Dr. Vicente Amezaga Aresti, that includes 74 translations from six different languages to Basque, 91 conferences in 3 countries, 270 press articles from 3 countries, and 63 poems in Basque and another 43 in Spanish.

In regards to the work of Dr. Amezaga Aresti, his son, in a conversation with EuskalKutltura.eus, indicated that he has donated to 12 libraries and international institutions, such as the US Library of Congress, Eusko Ikaskuntza, Euskaltzaindia, that he was a member of…and in Venezulea, to the Nation’s General Archive, the John Boulton Foundation and the National Library.

With an eye on continuing to spread the work of the Diaspora around the world, and especially the legacy of his father, Xabier Amezaga invites those interested to visit no only Xamezaga Publishing's, website but also those of Vicente Amezaga Aresti and the Repository Vicente Amezaga Aresti.