Alfredo Jover, Danborrada director: “Born in Donosti or in Mexico, the trick is to live and feel the Danborrada” 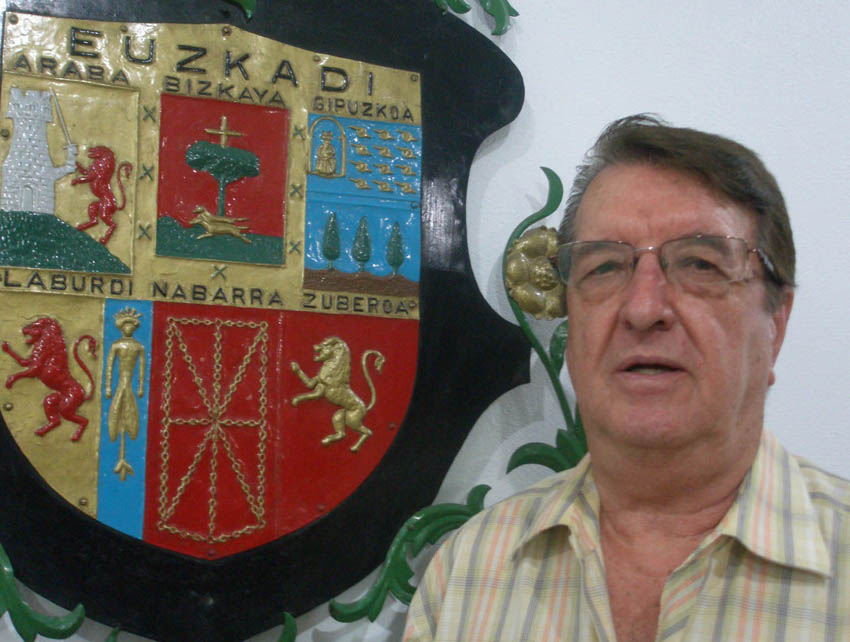 Alfredo Jover has directed the Tamborrada at the Euskal Etxea in Mexico since the 80s (photoEuskalKultura.com)

After the festivities in Donostia, the Diaspora continues its Tamborradas until Sunday.  They started at Basque clubs in Paris and New York, last weekend and next weekend they will take place in Madrid, Caracas, Murcia, Mexico, Valladolid and Shanghai

Joseba Etxarri.  January 20 (San Sebastian's city festivals) was a Tuesday this year and in the Diaspora, not being a holiday, each Basque club or community celebrated the day on the previous or following weekend to guarantee the largest Attendance possible.  There are only a few daring ones, like the clubs in Madrid and Barcelona, or in Argentina, Necochea and Arrecifes, that celebrated on Tuesday.  In Necochea, the festivities included an entire week of activities that started on the night of the 19th and will conclude with a gala and Tamborrada next Saturday. The Mexico City Basque club will also celebrate on Saturday, with a Tamborrada that has been directed since the 80s by Alfredo Jover Donnay, who is originally from Donostia but has lived in Mexico since 1959.

-Is a Drum Major born (Danborrada director) or is he/she made?

Here we have a little of everything.  There are people from Donostia or Gipuzkoa that have never played there, youth that are here for work, or study for two, three or four years that come to celebrate at the Euskal Etxea and so premiere here.  We also have Mexicans born here, members’ children, that have lived here all their life and who play at the same level as there.  It is possible to be born here and be a drummer or a Drum Major.  The trick is to live it and feel it.

-The Tamborrada is marked in red every year on the Mexico City Basque club’s calendar.  It is one of the classics along with celebrations of San Fermin, San Ignacio and Baztan Eguna.  How many are you and how many are you expecting next Saturday?

We are twenty-some that dress as chefs and compose the Tamborrada, out of those six are drummers and the rest are on barrels.  We are expecting between 150-180 guests who will also participate.  We pass out paper hats and pieces of wood with sticks, so that the people can join in.  That night dinner is at 10pm and we usually get to dessert around eleven thirty.  Afterwards the members of the Tamborrada leave to get dressed and gather in the fronton in order to enter at five minutes to midnight playing the march on the drums and barrels, so that we raise the flag at 12 on the dot to the sounds of the March of San Sebastian.

-It sounds very organized.  Do you practice a lot?

This Friday, the night before, we will have our fourth practice.

-You take it very seriously…

Having fun in no way conflicts with being well-organized and doing our best, and believe me, we have a good time.

-What is the repertoire?  Over the last few years in Donostia they have incorporated new songs by Sarriegi, the Old March of San Sebastian…

We play the same repertoire that we have all our life, 8 classic pieces by Maestro Sarriegi.

-Some societies and families in Donostia have once again included angulas in their menu for this celebration.  What is the menu in Mexico and what is the cost?

Everyone is welcome even though it is a good idea to RSVP.  Families and people of all ages usually attend; many are originally from Donostia or Gipuzkoa but many people with origin in Navarre and Bizkaia also attend, because the celebration is really considered a Basque celebration here; from Donostia, but Basque in the end.  I really enjoy it.  It will be a huge honor to participate and contribute my grain of sand to its development again this year.  Bagera! ("yes we are", first words of the Donostia March)