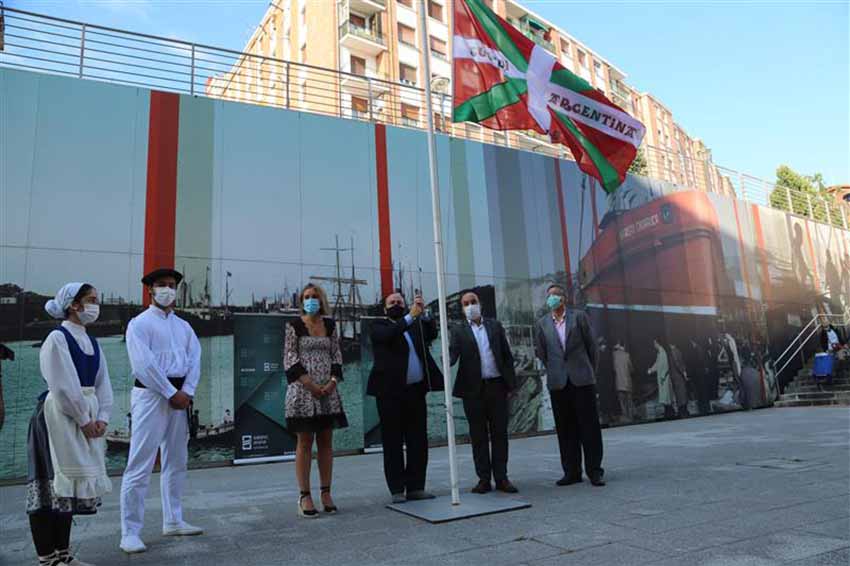 Bilbao, Biscay / Buenos Aires, Argentina. It took place on July 9, 1921, at the Laurak Bat Basque Club in Buenos Aires coinciding with the San Fermin festivities, and the 105th anniversary of Argentina’s Declaration of Independence (July 9, 1816). The official, solemn raising of the Ikurriña as a uniting symbol of all the Basques that was remembered this July 9, 2021 with a simultaneous event that was live streamed from Buenos Aires (Laurak Bat) and Bilbao (Sabino Arana Foundation headquarters).

Organized by the Sabino Arana Foundation and the Laurak Bat Basque Club, the event also sought to pay tribute to the contribution of the Basque Diaspora to Argentina and the Basque Country throughout history, with the raising in each capital of a blessed Ikurriña in the Buenos Aires parish of Our Lady of Montserrat, near Laurak Bat. In Euskadi, the Basque flag was hoisted by the Director of the Basque Community Abroad, Gorka Alvarez Aranburu, who led the event, the President of the Sabino Arana Foundation, Mireia Zarate, the President of the National Basque Party (EAJ-PNV), Andoni Ortuzar and historian Oscar Alvarez Gila. 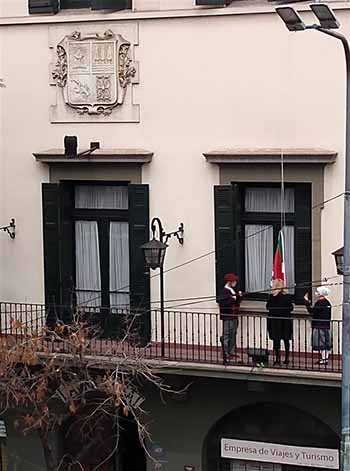 [Seen here, the raising of the Ikurriña at the Laurak Bat clubhouse on General Belgrano 1144 in the Autonomous city of Buenos Aires (photoSAF)]

In his address, Gorka Alvarez Aranburu, stressed the efforts of the Basque community abroad that “has put into practice the desire of our people, the union of the three political realities in which our country is divided: Hirurak Bat, Laurak Bat, Zazpiak Bat, Euzko Alkartasuna, Euskal Odola, Denak Bat….Whoever enters a Euskal Etxea, or feels Basque abroad, feels part of a unique people on both sides of the Pyrenees.  An aspiration that our elders yearned for an aspiration that new generations continue to pursue.  The Basque Diaspora is an example of that fraternal union of the Euskararen Herria,” he affirmed.

From Buenos Aires, the president of the Laurak Bat Basque Club, Jose Gabriel Anitua, recalled the centennial, noting that “for 100 years the Ikurriña suffered violent attacks and symbolic pressures.  The same day it was hoisted, due to a complaint from a minority of members, a police officer of the Montserrat neighborhood appeared with an order to lower it; but the intervention of the clubs president, Mr. Niceto de Echenagusia, a personal friend of the President of the Republic, Mr. Hipólito Yrigoyen, made the police force the withdraw of the filed complaint.  Later and already consolidated over the years, it also suffered pressure from diplomatic complaints in times of non-democratic regimes, akin to Francoism,” he asserted.

Despite all of these attacks, Anitua recalled, the Ikurriña “was never lowered, and over the years it was projected, reaching the meaning of a national icon.”  “Today in Argentina, it is recognized as an emblem of all Basques.  It is enough to see the stickers on cars, or windows around here, because the Argentine descendants of Basques adopted it as a sign of identity, it is their own, because it has been so for 100 years,” he stressed. 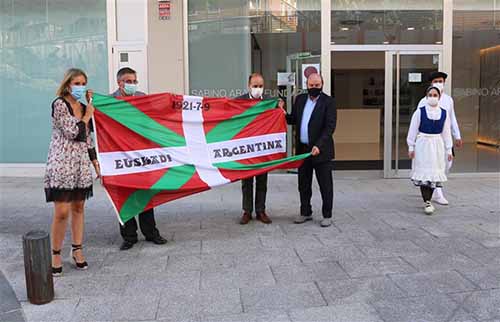 For his part, historian Oscar Alvarez Gila, Basque Diaspora scholar and author of the book Before the Ikurriña: Flags, Symbols and Basque Identity in America (1880-1935), lamented that today “the Diaspora continues to be the great forgotten one in the historical memory of Euskadi,” despite the fact that “in many moments of our past, it played an important role in the conformation and consolidation of Basque identity.”

He referred to the contribution of the Diaspora, highlighting that it was the Diaspora that took steps towards its definitive recognition, for the first time.  “On July 9, 1921, the Laurak Bat Basque Club in Buenos Aires was the first non-political institution that decided to raise the Ikurriña as a representation of Basque national identity.  It may seem like a small step, but it marked the beginning of the progressive acceptance of the Ikurriña throughout that decade, both in the Diaspora and in the Basque territory; to such an extent that when Eusko Ikaskuntza issued its report on whether the Ikurriña should be considered the Basque flag, it argued, among other things, that is was already used in this sense by Basques in the Diaspora.  Its becoming official in 1936, by the first Basque Government would be the culmination of this story,” he stressed.

Decisive role of the Diaspora

The President of the Sabino Arana Foundation, Mireia Zarate, was in charge of closing the event, meriting the decisive role that the Basque Diaspora and the Euskal Etxeak have in the future of the Basque people as a nation.

“Every nation worth its salt must know its history well and must know how to disseminate it.  Emigration has been a constant throughout our evolution as a nation, having America as our main destination.  One of the main characteristics of that emigration was that it gave birth to a Diaspora that knew how to combine the feeling of identity linked to its Basque roots, with a firm commitment and integration the different countries where it settled, where it contributed to its development and well-being, and with this, also to the prestige of our nation,” she affirmed, not without first recognizing, “once again the immense value and strategic importance of the work carried out by all the Euskal Etxeas located all over the world, enabling the maintenance of our culture and its transmission to the next generations.”