Would you like to put your imagination to the test? Enter the “Irudimena” contest by EKE and the Azkue Foundation 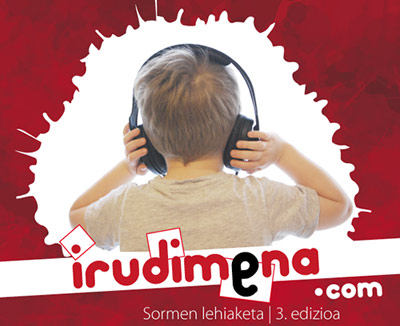 The Basque Cultural Institute (EKE) and the Azkue Foundation have opened the call for the third edition of “Irudimena,” aimed at boosting artistic creativity in the Basque Country and the Diaspora. The proposed challenge is to choose a sound, and based on that sound, create a new one, a text or an image. The deadline to enter is May 15th. Prizes are gift checks that can be used at the FNAC (online outlet for books, records, and technology). The first three places will win 100, 200 and 300 Euros, respectively.

Bilbao, Bizkaia.  The “Irudimena” (Imagination) contest is part of the Hogei'ta project, a program that EKE created to boost artistic creation among youth.  The third edition has been supported by EKE (Euskal Kultur Erakundea, the Basque Cultural Institute of Iparralde, based in Uztaritze, Lapurdi) and the Azkue Foundation (based in Bilbao, Bizkaia) and this year has something new: if the previous editions were based on images, this year’s is based on sounds.

Participants should choose among 8 sounds as inspiration for his/her work.  The sounds are part of the “Euskal Herriko Soinumapa” (Basque Country Map of sounds) project.

Using this sound as a base, participants can create:

Creations should be sent via this form before May 15th.

Prizes are gift checks to be used at FNAC.  The first in each category will win 300 Euros, second place 200 and third place 100.

Contest rules here (in Basque or Spanish only; it's in the process of being translated into English).