With Ikurriña in hand, Argentine Miguel Boado joins the cities of Olavarria and Lujan on foot to fulfill a promise to the Virgin 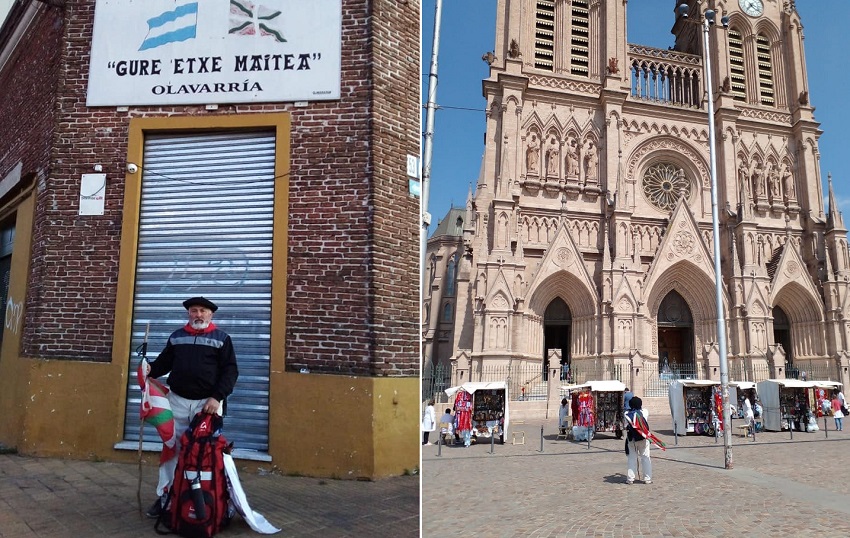 Miguel Boado, at the beginning of the trip in front of the Olavarria Basque Club and at his destination arriving at the Basilica in Lujan

Olavarría, Argentina. Miguel Boado isn’t just a member but has also become one of the pillars of the Olavarria Basque Club.  Although a Basque descendant --his family tree includes the surnames Bergara and Urbina -- it was through his daughters, who began dancing with the club dantzaris, that he joined Gure Etxe Maitea.  That is when he began collaborating in various activities especially in the area of cooking.

When asked about how the idea of a pilgrimage to Lujan came about, Boada shared with EuskalKultura.eus a personal experience: “Some years ago, my mother had a serious health issue and I made a promise to the Virgin: if she made her well, I would walk to the Basilica.”

“Something similar happened,” he continued, “when the Basque Club dreamed of participating in the Semana Nacional Vasca in 2019, but we didn’t have a complete dance group.  I also entrusted myself to the Virgin.  Both times I had an answer and so that is why I have made the trek more than once.”

To cover the 360 kilometers between Olavarria and Juan, Miguel Boado needed 9 days and several pairs of alpargatas.  The flying Ikurriña accompanied him on each step even when he arrived to his destination and entered the Basilica.

Saladillo and a call to the Basques

During the trip, Boado was spending the night in different cities. Half way there he arrived in Saladillo where he couldn’t find a hotel and so he sought “refuge,” at the local Euskal Etxea. “The folks at the Itxaropen Basque Club not only welcomed me but they gave me a place to sleep in the clubhouse.  I arrived one day they were preparing a paella to sell and so I got to work with them,” he explained.

After the pilgrimage and back home in Olavarria, Miguel Boado only has words of thanks for everyone who encouraged him in this project, especially the Gure Etxe Maitea Basque Club where they facilitated the conditions for him to make the trip.

If you would like to join Miguel on the pilgrimage, all you have to do is get in touch with the Euskal Etxea on Facebook: Centro Vasco Olavarría Gure Etxe Maitea.