Under the “Amalur,” seal, potter Mariana Demicheli recreates in Argentina Basque pottery from the 18th and 19th centuries 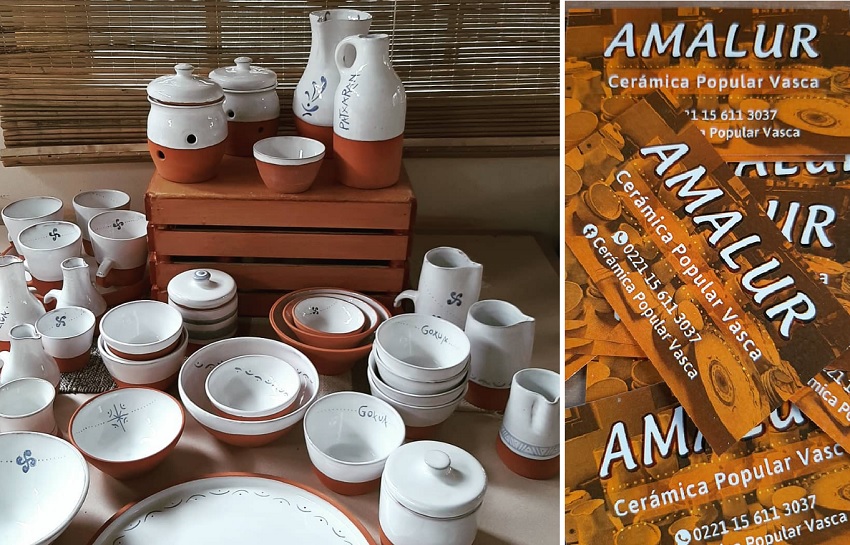 Some of the productions of “Amalur,” Basque pottery made in Argentina

La Plata, Argentina. Mariana Demicheli Uribeondo created the “Amalur” project in 1994, when she had the opportunity to travel to the Basque Copuntry.  “At that time I was studying at the National Ceramics School #1 in Buenos Aires and in general, the popular productions always sparked my interest.  In the Basque Country, I found a kind of very simple production, well determined by its particular forms, full of content and full of history,” she explained to EuskalKultura.eus.

At “Amalur,” neither the theme nor the name are coincidental.  “My grandparents, Pablo Uribeondo and Maria Ascension Ruiz left Europe with four daughters in the ship Monte Ayala and arrived in Argentina in 1951. From Basauri (Bizkaia) to San Miguel (Buenos Aires), and to the Álvarez Vázquez factory, the first metallurgy industry in Argentina around which they developed their lives and their affections,” she relates.

Mariana explains that her undertaking is a research and recreational project on ceramics made in the Basque Country between the 18th and 19th centuries.  “A type of production made by numerous pottery makers, distributed throughout the region which has reached homes for daily use.”

“The ceramic process that I carry out today in my workshop aims to preserve the productions of yesteryear, from the choice of clays, the creation of pieces on the potter’s wheel, the decoration, enamels and firing temperatures, so that each piece contains the legacy that our potter ancestors left us.”

In this way, at Amalur, the profession and family ties coexist, the particular and the collective; it is where I find my roots, its people and its particular way of being,” she concludes.

“Amalur” creations are available on Terruño Regalería and also through the Euzko Etxea in La Plata sales, however the most direct way to purchase is through its Facebook page. To contact her by phone 0221 15 6113037.