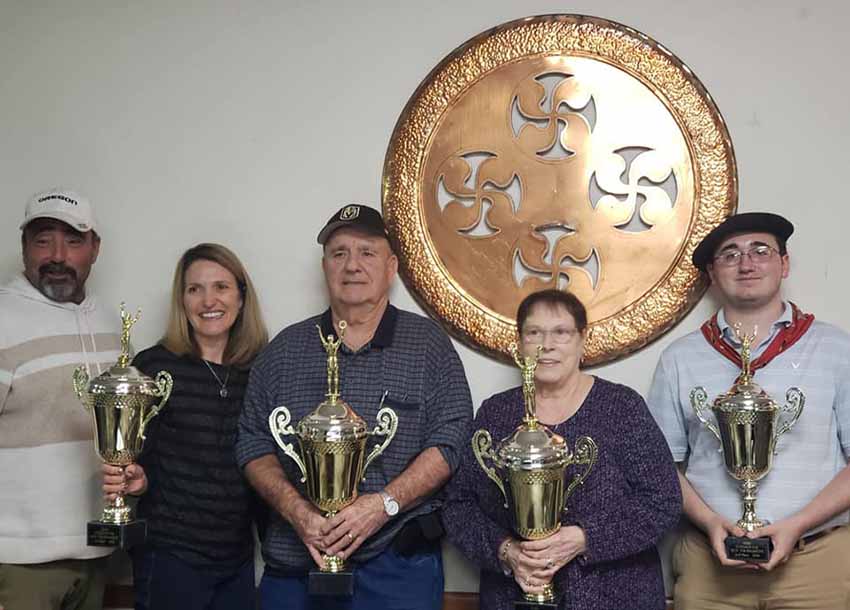 From left to right, Sherriff Aitor Narvaiza, along with Josette Iribarne Lazcano, Etienne and Mayie Amestoy and Jean-Jules Flesher

Elko, NV, USA. In the context of the Coronavirus and with the adoption worldwide of hard measures to prevent its spread, the Sheepherder’s Ball and the NABO Mus Tournament held lastweek at the Elko Euskal Etxea were possibly the last two Basque events for the moment in the Basque community. On the same day the Special Bertsolari Tribute in San Francisco had been cancelled, and since then events all over the country have also been cancelled by Basque clubs all over the clountry in places like New York, NY; Chino, CA; Boise ID; Gardnerville, NV…

The Sheepherder’s Ball dinner/dance was a total success filling the Basque club to capacity with participants coming from various places in Nevada, Idaho and Utah, even California, to join in the festivities.

Live music on Saturday night was provided by Amerikanuak and Mercedes Mendive.  During the evening there was a silent auction with proceeds from the event going to support club member Mike Biers, a single father diagnosed with cancer.  The hope was to raise funds to help with medical expenses in this country that doesn’t have a public health system.

The next day, Sunday, the Mus Tournament took place with the winning team advancing to the NABO National Tournament.  First place team was Mayie and Etienne Amestoy with second place going to Jean-Jule Flesher and Josette Iribarne Lazcano.  If not cancelled due to the Coronavirus the Amestoys will advance to the NABO Tournament planned for June 20th in Los Banos California.  Winner of that tournament will advance to the World Championships in Montevideo, Uruguay in October.