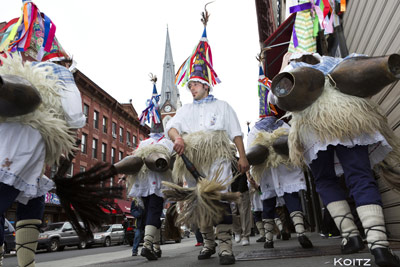 Aberri Eguna, the Day of the Basque Homeland, is the most important festivity on New York’s Basque club’s calendar of events. But Aberri Eguna 2013, celebrated last Sunday, was a very special gathering for the New York club that is also celebrating its Centennial this year. The board of the directors of the oldest Basque club in the US invited the Zanpantzar from Berriozar in Navarre to this signature event, which was their first trip to the Big Apple.

New York, NY.  On Sunday at noon, after mass celebrated by NY Auxiliary Bishop Josu Iriondo, the Joaldunak, followed by several people, left the Basque clubhouse in Brooklyn.  The sound of its characteristic bells was heard through the streets under the watchful eye of the Basque club’s members and friends as well as hundreds of people who came upon the parade, stunned by its carnival rhythms.

Neighbors in the area expressed their positive surprise by the colors of the outfits of the Zanpantzar and their hats.  Many of them took pictures and video with cameras and cell phones.  Some also joined in the parade and followed the movements and the sound of the cowbells that were carried by boys and girls from Berriozar for the occasion. After reaching McCarren park, the meeting point of the Greenpoint and Williamsburg neighborhoods, the Joaldunak returned to the Basque club without stopping their bells.  In the afternoon, after pintxos and prior to a succulent meal, prepared as usual by Basque chef Iñaki Lete, a tribute to former living Basque club presidents took place.

The current club president is Aitzol Azurtza, who awarded plaques to Mari Luz Landaburu who received the memento on behalf of her husband, Juan Angel Landaburu (president from 1998-2001) who had to attend to family matters in Euskadi and couldn’t attend the event.  Azurtza also awarded plaques to Luis Foncillas Etxeberria (2003-2005) and to Itziar Albisu (2005-2013). The day of celebration and declaration concluded with dinner prepared by chef Iñaki Lete, followed by music and dance that lasted into Monday morning.  As usual, besides the guests from Berriozar, a large number of Basques from Donostia, Mungia, Pamplona and Durango, among others were also present.

Justin Doyaga, a New York Basque who moved two years ago to Ohio, was also in attendance with his his wife and their three children. The Doyagas gathered three generations at the event with Emilia Doyaga at the head.