The Euzko Etxea in La Plata planted a sapling from the Tree of Gernika, certified by the Bizkaia authorities in front of its clubhouse 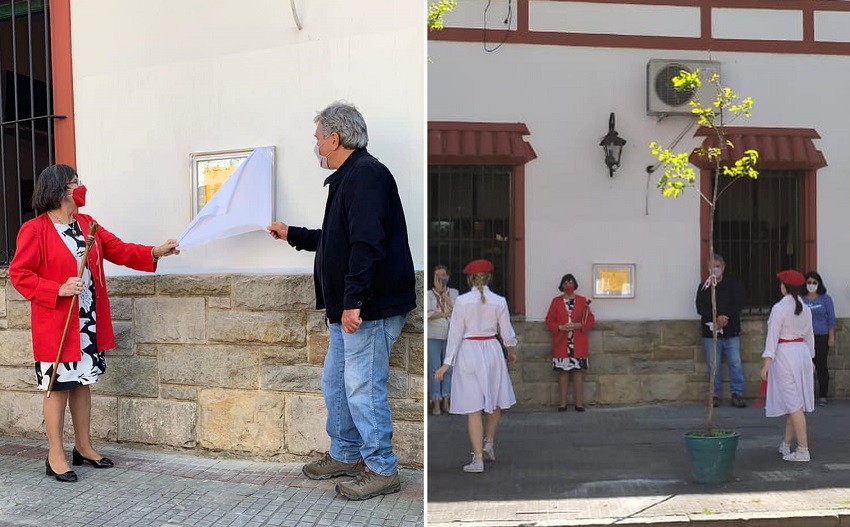 A new Tree of Gernika in La Plata

La Plata, Argentina. As part of its Day of the Basque Diaspora activities, the local Basque club planted a sapling from the Tree of Gernika in front of its facilities located on Calle 58 and 14. Attending the ceremony was club’s mayor, Elena Bilbao, club president, Javier Clua, both of whom addressed those in attendance as well as unveiled a plaque attesting to the authenticity of the sapling as “Son of the Tree of Gernika,” confirmed by the “Bizkaiko Batzar Nagusiak,” or Parliament of Bizkaia.

Those present sang “Gernikako Arbola,” and club dancers performed an Aurresku. The Day of the Basque Diaspora at the Euzko Etxea also included a lunch and a film event with the participation of Carlos Gabilondo as part of the Traveling Film Series.

The Tree of Gernika in the Capital City

Anyone wishing to verify the close relationship and the link that exists between the so-called city of diagonals, and the Basque community, can do so not only by approaching the headquarters of the Euzko Etxea in La Plata, one of the largest in the country in size and activity, but also by taking a tour of the Basque oaks that grow in its various squares and parks.

According to an article by Jose Joaquin Saldias entitled “The Memory of the Tree of Gernika in la Plata,” in issue #10 of the Eguzkia magazine, the city currently has five oaks donated by the community in public spaces.  One of the oldest is in the Pereyra Iraola Park, and was brought at the beginning of the 20th century by the Iraola Family, originally from Tolosa.

In 1956, the oak that is now in the Moreno Plaza was planted, in front of the Cathedral, and in 1968, they planted others on the corner for 58 and 14 streets, that is to say, in front of the clubhouse.

In 1982, the Euzko Etxea planted another in Euzkadi Plaza on 13 and 55; and in 2007, coinciding with the 70th anniversary of the Bombing of Gernika, they planted another one, this time in the Peace Garden.  This was donated by Salvador Oria who grew the sapling from an acorn from the oak at the Juan de Garay in Buenos Aires.

Unlike the previous oaks, the oak planted this year includes a certificate of authenticity, which proves its connection with the one that currently grows at the Batzar-Etxea in Bizkaia.

Complete article by Saldias in issue #10 of the Eguzkia magazine, here.