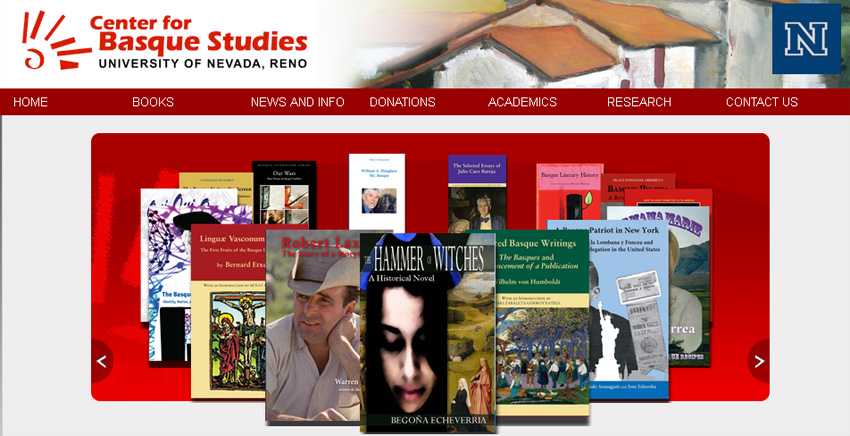 As in previous year, books from the Center for Basque Studies at the University of Nevada, Reno will be at the Azoka

Today at 9:30 the 49th edition of the Durango Book and Record Fair, the Durangoko Azoka opens its doors.  Today is especially dedicated to school students but the fair is fully open to the public.  As in prior years, stands in the Landako pavilion become the showcase of the latest in Basque publishing and music.  Following is a small summary of the titles relation to the Diaspora that will be available in the Fair.

Durango, Bizkaia. The Durangoko Azoka has begun, and has already welcomed its first visitors.  There are a number of novelties at this year’s fair, including the most recent titles of Basque cultural production in 2014, compounded by a catalogue of publications from various publishers.  Some titles may go unnoticed with so many to choose from, and so we will highlight here some titles related to the Diaspora that will be available at the Azoka.

For starters, one of the publishers that have attended the fair for years is the University of Nevada with publications from the Center for Basque Studies at the University of Nevada, Reno.  This year their stand is Goienkale 31.  Among the titles published by them this year are Fifteen Days in Urgain by Jose Antonio Loidi, the first detective novel (1955) published in Basque, translated by Nere Lete, from Boise, or Hammer of Witches, a historic novel based on the witch hunts in the Basque Country written by Basque-Californian Begoña Echeverria. Other titles in their catalog can be found here.

Ttarttalo (Goienkale 1.-7) includes other works previously published like The Basque Hotel by Basque-American author Robert Laxalt, Her Majesty’s Anteater, by Seve Calleja, or The Good Oak, by MartinEtchart.

Other new publications in the Diaspora include Patria vasca en Argentina by Magdalena Mignaburu (published by the Foundation Sabino Arana) and the comic Joanes, el ballenero vasco, a graphic novel created by Guillermo Zubiaga who now resides in New York, originally published in English and translated this year into Basque and Spanish.