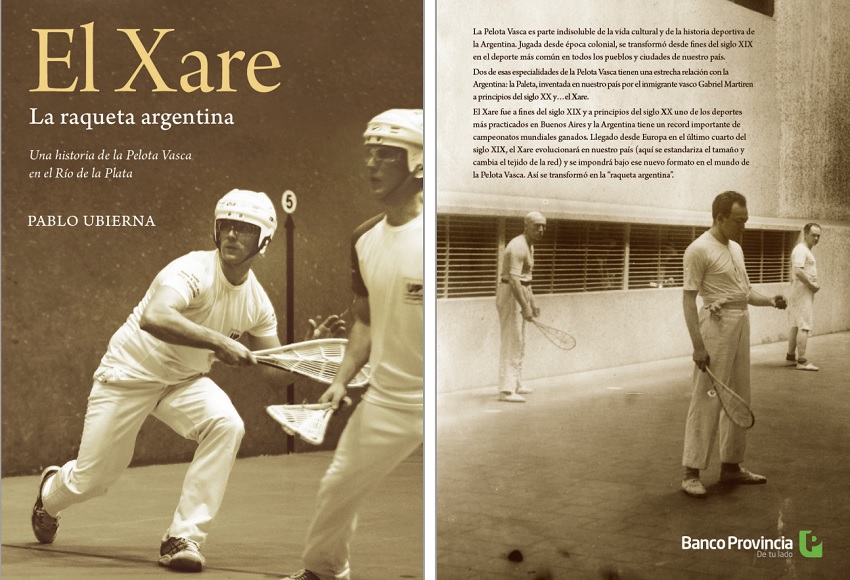 To support the diffusion of the Balda and Del Rio tournaments that will take place in 2016, the Dr. in History and Xare-player, Pablo Ubierna, just published the book El Xare. La raqueta argentina. Una historia  de la Pelota Vasca en Rio de la Plata (Xare, the Argentinean Racquet, the history of Basque pilota in the Rio de la Plata). The digital version is now available online and can be downloaded free of charge while the paper version will become available by year’s end.

Buenos Aires, Argentina.   In hopes of promoting the Basilio Balda and Vicente del Rio tournaments that will take place next year again in Argentina, one of the main supporters of this type of Basque pilota, Pablo Ubierna, has presented a book, complete with video, to introduce the history and reality of Xare in Argentina.

The video gathers images from championships that took place in October 2013 in La Plata and Buenos Aires, with xare players from South America, and Europe.  The audio-visual work was directed by Dieguillo Fernández, filmmaker and pilotari from the Laurak Bat Basque club in Buenos Aires.  Video can be seen here.

The author of the book explained to EuskalKultura.com that at the beginning he thought of it as a smaller project.  “The original idea, was to create a pamphlet on Xare tournaments."  "But when we began investigating I found a lot more material and history on this type of Basque pilota in Argentina that warranted being told.  In fact, it was even part of the Centennial Olympic Games,” Ubierna said.

Motivated by the information gathered including valuable data compiled by Ricardo Frigerio (†2013) and Juan Labat (†2002); photographs facilitated by the Basque Museum in Bayonne as well as from Iparralde bibliographic contributions from Jakes Saldubehere, to name a few.

El Xare. La raqueta argentina. Una historia de la Pelota Vasca en el Río de La Plata tells the story from the perspective of “a xarista who loves his sport and wants many more to get to know it and how to play it.”

The digital version of the book is now available online and can be downloaded from here. The paper version, on the other hand, will come out near the end of the year.  For more information, contact those responsible for Xare in Argentina on Facebook here: Copa del Río Balda.  You will also find information on the website that is continuously updated and provides information on next year’s championships.