The Basque punk band La Polla Records celebrates its 40th anniversary with a tour through Argentina, Uruguay, Peru and Chile 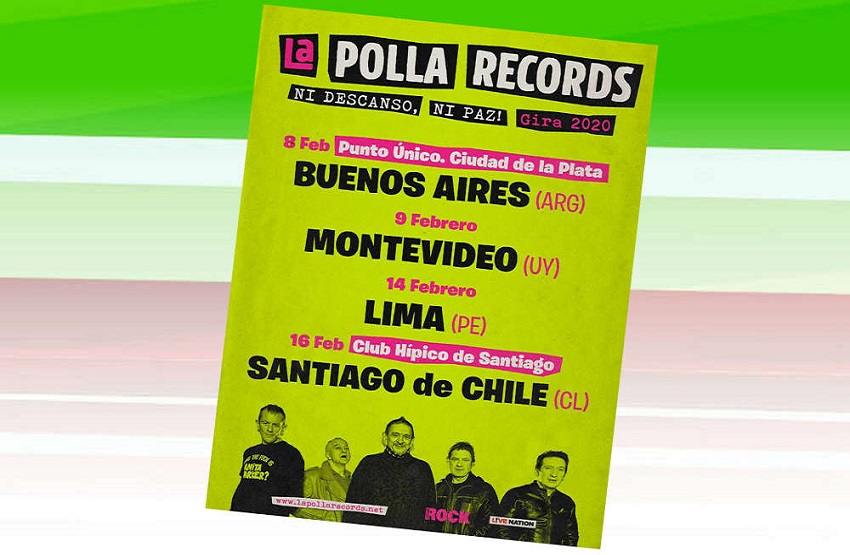 Tour dates for La Polla Records in South America, remember that the concert in Chile has changed venues (it is now at the Bicentennial Stadium) that has a larger capacity

Vitoria-Gasteiz. Spanish speaking punk rock pioneer and icon, La Polla Records has been a cult bank, not only in the Basque Country and Spain, but also in South America.  That is why this regathering to celebrate forty years since the group’s formation. Evaristo singer and leader and musicians Sume Abel, Txiki and Tripi will travel to the Southern Cone to present their latest work “No Rest or Peace.”

The tour will begin in La Plata, Argentina on Saturday February 8th where the legendary band will reunite with their fans in the Punto Unico hall.  On this occasion, the accompanying groups will be “Ley del buey” and “‘Eterna inocencia.”  The second stop will be on Sunday February 9th in Montevideo, Uruguay, to perform at the Antel Arena.

After the concert on both sides of the La Plata River, La Polla Records will travel to Lima for the first time.  On February 14th the Basque band will perform at the C.C.Barranco Arena in the Peruvian capital.  The last concert will take place in Santiago, Chile at the de la Florida Bicentennial Stadium on February 16th.  More information on the tour available here.

“No Rest or Peace,” is the first work by LPR since 2003 when the band decided to take a break.

After saying farewell to their Latin American audiences, the tour will continue through various Basque locales, as well as others in Spain.