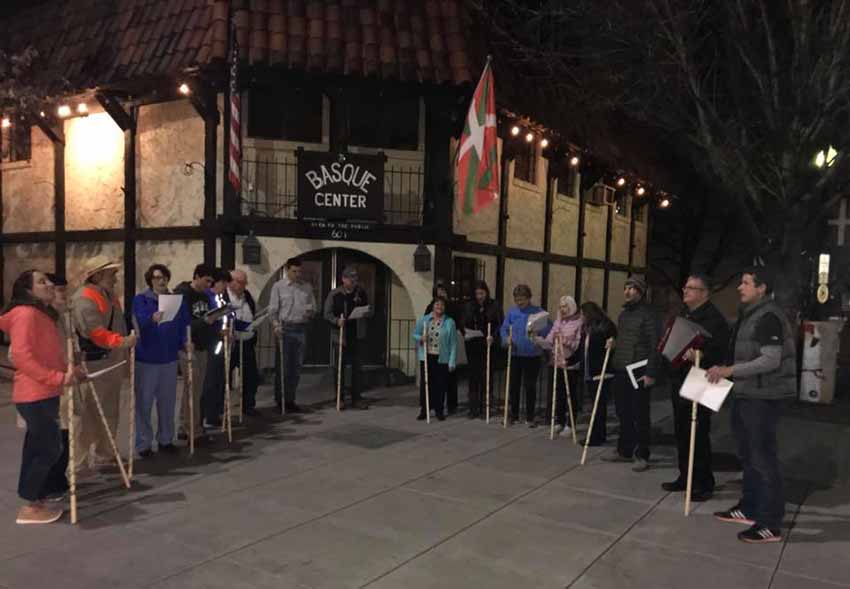 Boise, Idaho, USA. A few Basque clubs will celebrate the traditional festival of Santa Agueda or Agate Deuna in different countries around the world.  Among those celebrating will be the Euskal Etxea in Madrid, the Bruselako Euskal Etxea, the Valencia Euskal Etxea and the Basque Center and Ikastola in Boise.  All of the events will include the singing of the traditional verses, and three will include walking through the streets and plazas in the vicinity of the Basque clubs as they will do in the cases of Boise and Madrid, both at the heart of their cities.

(If you celebrate in your Basque club please let us know by emailing info@euskalkultura.com)

The choirs of Santa Ageda are a tradition in different regions of Euskal Herria on the eve of February 5th with the celebration being called Santa Agera, Agate Deuna, Santa Eskea and other names.  Participants go from farmhouse to farmhouse, or house to house with a big stick in hand rhythmically hitting the ground while singing the song, or the allusive verses.

Santa Ageda in the Diaspora

The first to celebrate will be Boise who advancing the festivities by one day will sing in the city’s Basque Block today. The route will begin at the Museum and Basque Cultural Center at the conlusion of the Basque classes.  With makilas in hand, and after a final rehearsal, the streets, and establishments in the area will receive the singers in bars, the Euskal Etxea and restaurant Leku Ona, as announced by Todor Azurtza, Basque teacher and one of the event’s organizers.

The night before Santa Agueda, when it is celebrated in the Basque country, the Laurak Bat Basque Club in Valencia and the Euskal Etxea in Madrid will join in the festivities. In Valencia, the event will begin at 7:30pm after a final rehearsal of the verses.  Afterwards they will have dinner together according to the Basque teacher, German Eiguren, who may have some relatives participating in the Boise, Idaho event.

The celebration in Brussels will take place on the weekend and will begin at the Euskal Etxea on Saturday travelling through several streets, weather permitting, to conclude with a Txoko at the clubhouse with a dinner that will not lack good humor and traditional singing.

Finally, the day before that in Brussels, on Friday, members of the Euskal Etxea in Madrid will gather again to celebrate its annual Santa Agueda dinner with a traditional menu (beans with all the fixings), prepared by club president, Karmen Turrillas.  Final day to RSVP is Tuesday.