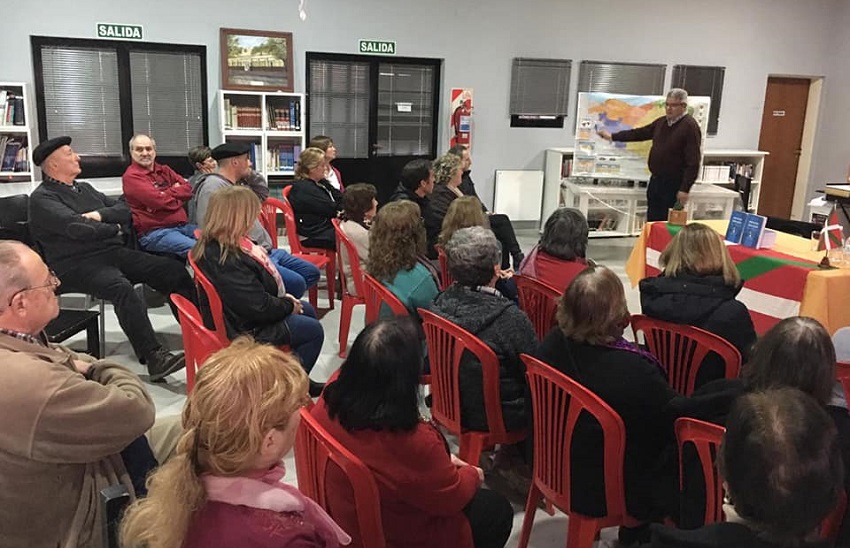 Cesar Arrondo at the Agusto Cicare Library in Polvaredas

Saladillo, Argentina. The Itxaropen Basque Club in Saladillo organized a program of activities as part of the visit and as part of FEVA’s cultural offerings made Cesar Arrondo in August. One of the events was co-organized with the Agusto Cicare Library in Polvareda where Arrondo presented his book Hipolito Yrigoyen (1916-2016) First Centennial of Popular Sovereignty. Taking the figure of the Argentine president of Basque origin, Arrondo also talked about the influence of the Basque immigration in the country.

The Basque club also organized an activity aimed at the youth, inviting students from the Higher Institue of Teacher training No. 16 to present its exhibition “A Look at Gernika from the ISFD #16” at the clubhouse.  To complement the historic information, Arrondo spoke about the bombing and showed the documentary The Human Footprint.

But the professor that is originally from Laprida doesn’t just stand out in the field of history.  In recent years, he has honed his skills in the kitchen and that is why he also had a gastronomic moment where he showed off making Paella in Saladillo.

The Itxaropen Basque Club will also hold is annual General Assembly this Wednesday according to our agenda.

Photos of the activities, here.