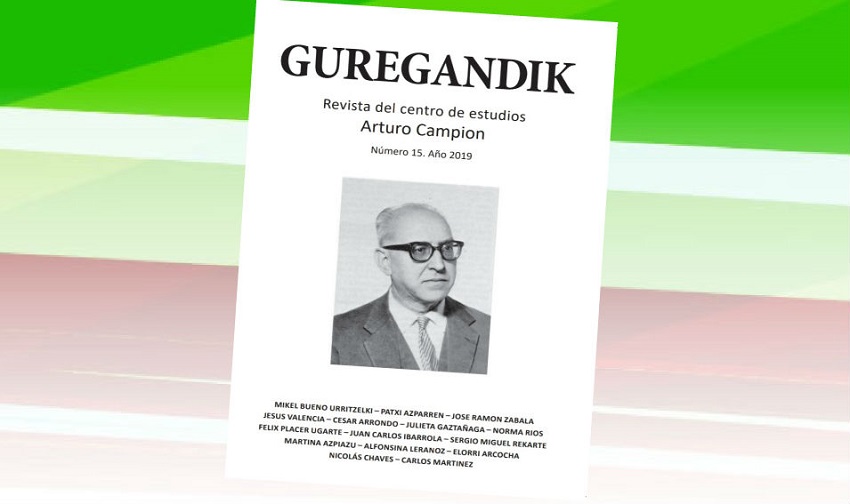 Laprida, Argentina. The Arturo Campion Culture and Nationalism Studies Center based in Laprida, concluded 2019 with the publication of its annual magazine.  Number 15 of “Guregandik,”edited by Nicolas Chaves includes 14 articles from varied specialties and authors allowing its readers to delve into a wide array of themes, interests and eras.

With its traditional design the publication has a photo of Dr. Justo Garate Arriola, on the cover, 25 years after his departure.  Born in Bergara and passing away in Mendoza, Dr. Justo Garate was a professor and vice-dean of the University of Mendoza, as well as an honorary member of Euskaltzaindia (Academy of the Basque language) and a Doctor Honoris Cause from the University of the Basque Country.

The articles included in this issue of “Guregandik” are:

-Ongi Etorris aren’t the Problem, by Jesús Valencia
-The Cooperative and Popular Society Phenomenon. A Social Anthropology Perspective by Patxi Azparren Olaizola
-The Origins of the PSOE in Navarre (1892-1936), by Mikel Bueno Urritzelki
-Towards a Basque Church: Historic Memory and Current Situation, by Félix Placer Ugarte
-Azkue, Donostia and Lomax: an Analysis of Lullabies, by Elorri Arcocha Mendinueta
-A Prussian Prince in the First Carlist War, by José Ramón Zabala Agirre

-Basque Painting in Mar del Plata. Is Echo in Written Press (1943–1956), by César Arrondo
-Traveling with Heart. The Touristic Offerings of Euskal Herria by Members of the Basque-Argentine Diaspora, by Martina Larraza Azpiazu
-Independence isn’t Nationalism. Stereotypes and Epistemological Habits in Contemporary Basque Politics, by Julieta Gaztañaga
-Zombies, Vampires, Mummies, and the Basque Imagination in the Trilogy of Ataun of the Dead (2011-2019), by Alfonsina Leranoz
-Artizakun, a Place, Time, a Hidden Paradise, by Juan Carlos Ibarrola
-Remembering the Past. Characters who Made History, by Norma B. Ríos
-The History of Osses, by Sergio Recarte
-A First Approach to the Ocupa Movement in Euskal Herria, by Nicolás Chaves
-Modern Pastorals in Iparralde, by Carlos Arturo Martínez

Anyone interested in receiving a copy should contact the Center here: arturocampion@gmail.com or Chaves as well nicolasjchaves@gmail.com. The cost is 300 pesos.