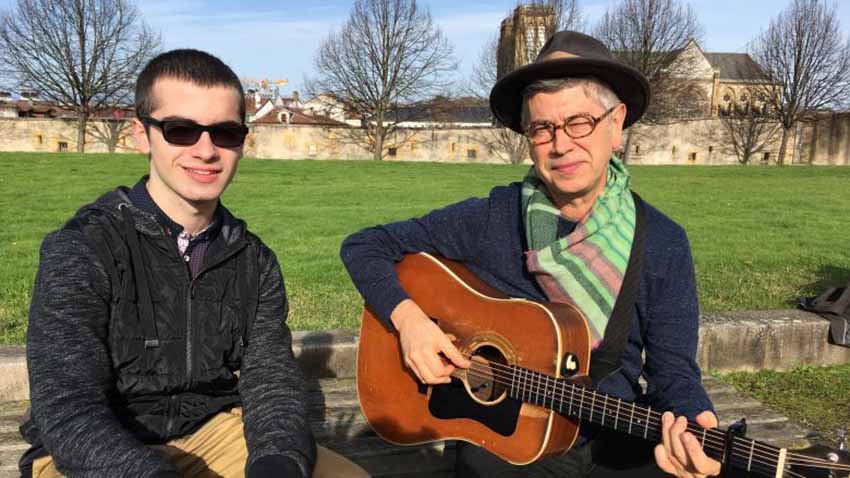 Donostia-San Sebastián. The young singer from Behorlegi, Behe Nafarroa, Mattin Lerissa, and Baiones singer and musician Mixel Ducau will begin a trip to the western United States this week, specifically to California.  The tour will be brief, two weekends, with the first performance this Sunday in Chino at the local Basque club, and then in San Francisco on March 1st at the Basque Cultural Center.  There may be a possibility of adding more concerts between the two.

Video on ETB by Nerea Olaso about Mattin Lerissa, on the occasion of the release of his second album

Mattin Lerissa is only 20 years old, and already has recorded two albums, “Gazte naiz gazte” (2019), and “Bidez bide” (2016) that was recorded when he was only 16. He likes to sing popular songs which comprised his entire first album, while on the second, he wrote the majority of the music and songs, putting lyrics of various writers to music.

Mixel Ducau, from Baiona, doesn’t require any introduction since he is a big name in Basque music since his start with the mythic group Errobi until Zaldibobo or Bidaia created with his wife, the Basque-Californian singer and instrumentalist, Caroline Phillips. He has participated in many projects as a singer, composer, musician, arranger, or performer, and plays several instruments including the saxophone, guitar, txirula, alboka and ttun-ttun…