Semana Vasca 2020 has started; see the contents that the Macachin Basque Club will upload to its social media through next Monday 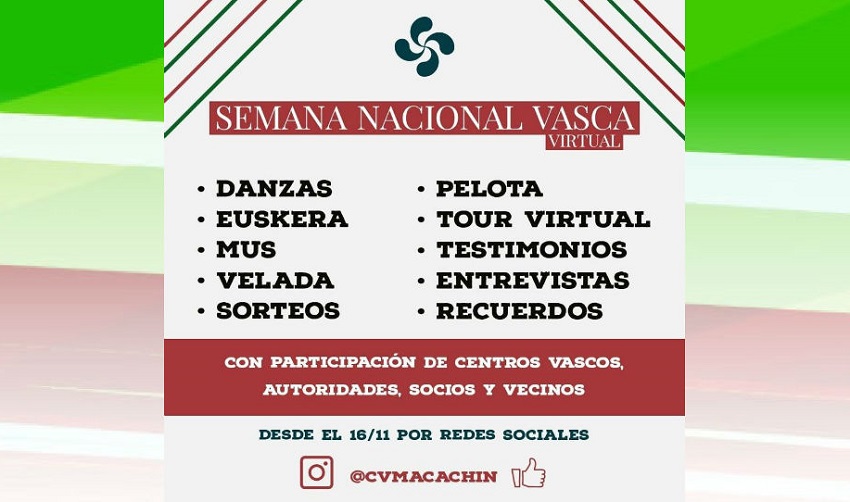 Macachin, Argentina. Yesterday afternoon the Euzko Alkartasuna Basque Club, host of Semana Nacional Vasca 2020, inaugurated what will be a series of videos to commemorate these days that under normal circumstances would have marked a huge party in the Basque Diaspora in Argentina.  The original dates for this year’s Semana Vasca were November 16-Monday, November 23rd and its presential celebration has been posponed to next year.

The virtual program began with a greeting, a video showing the costumes by Magdalena Mignaburu, and a greeting from Euskal Herria from the Secretary General of Foreign Action of the Basque Government, Marian Elorza

Videos will be continued to be uploaded through Monday the 23rd with the majority being videos taken at the SNV 2015 in Macachin (some never seen before), as well as videos that have been made especially for the occasion.  During the week, there will also be raffles and many interesting surprise awards.

Following is a program for what will be uploaded all week long.  Organizers have said that some modifications may occur, due to the pandemic with some of the community videos not being able to be completed yet.

-Plaza dances (waiting for confirmation to be able to do it live)
-Banquet (souvenir from 2015)
-Words of Basque students
-Greeting from Andoni Ortuzar, president of the EBB of EAJ-PNV
-Evening (memory of 2015)