Pedro Palacin arrives in Argentina to give a talk tomorrow in La Plata “Aita Madina, Universal Basque, and Fascinating Composer” 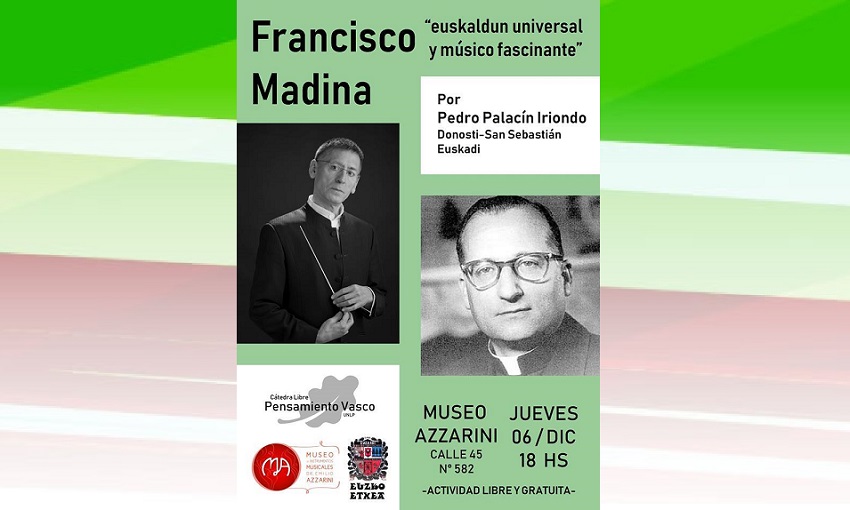 La Plata, Argentina. The event is organized by the Chair of Free Basque Thought at the UNLP, the Museum of Musical Instruments, “Emilio Azzarini,” and the Euzko Etxea in La Plata.  The goal of the event is to share the live and works of musician, Francisco Madina Igarzabal, originally from Oñati, better known as Aita Madina, and whose work in Argentina are especially known as he served as a priest here from 1932-1955.

Pedro Palacin Iriondo is the Director of the Andres Egiguren Orchestra in Eibar, Gipuzkoa.  As a researcher of the works of Aita Madina, he has recently recuperated and orchestrated the “Concerto Sacro for guitar and String Orchestra,” which will debut in Buenos Aries on December 8th, information here–  and “Concerto for Harp and Orchestra,” as part of a project to enhance the music of this Basque master.

The talk “Francisco de Madina, Universal Euskaldun, and Fascinating Music” will take place on December 6th at 6pm at the Azzarini Museum 45 N 582 Street in the city of La Plata.  The event is free and open to the public.