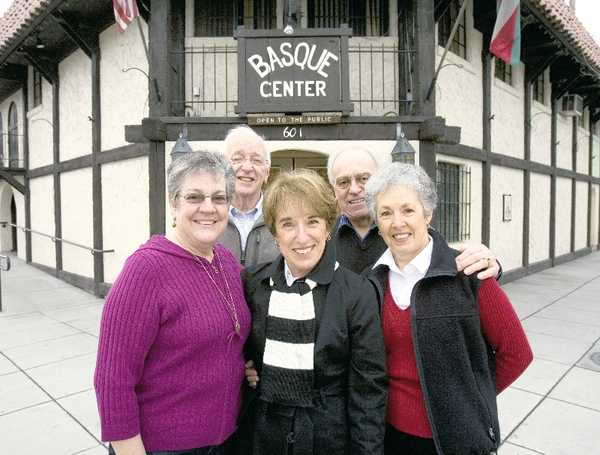 The Basque dance group Oinkari is celebrating its 50th anniversary with more than a year of activities. The festivities will begin at the St. Ignatius Basque picnic in Aug. 1-2 (the current Oinkari dancers will perform), culminating with Jaialdi in July of 2010 and ending with a dinner dance in December of 2010 - 50 years after the first group's first performance. "We're going to try to get all the alumni to dance at one time at Jaialdi", Al Erquiaga, one of the original members said. "That will be over 700 people". Though two of the original dancers now live out of state, all seven -now in their 70s- plan to join in the festivities. The newspaper Idaho Statesman interviewed those Oinkari pioneers in the following article.

Boise, USA. You can't call yourself a true Boisean if you've never seen the Oinkari Basque Dancers. They're part of our heritage, like Music Week or tubing the Boise River.

But do you know when and how they started?

Probably not. They're so much a part of the local scene that they seem to have always been here.

The group began after seven Boise Basques in their early 20s visited Spain and learned some Basque songs and dances. They thought the dances would be a fleeting diversion.

Nearly half a century later, Idaho Basques are planning more than a year of events celebrating the 50th anniversary of that trip and what it started. What began with seven 20-somethings has become a tradition that has included more than 800 dancers performing at venues from local parks to the rotunda of the U.S. Senate.

"They've represented Idaho nationally and internationally," Basque Museum and Cultural Center Director Patty Miller said. "And they've been great preservers of our culture. When the visitors' bureau or the tourism department want to point something out about Boise culture, there's nothing more visible than the Basque dancers."

The seven who started it all - Al Erquiaga, Delphina and Diana Urresti, Toni Murelaga, Simon Achabal, Clarine Anchustegui and Bea Solosabal - spent the summer of 1960 in Europe. While visiting the Basque country, they met a group of dancers who called themselves the Oinkaris, which loosely means dancing feet.

"They taught us two dances to take home," Boisean Toni Achabal said. (Her last name being the same as that of another member of the original seven isn't a coincidence. She and her husband, Simon, were the first of many Oinkari dancers to be married.)

"We had the idea of starting a group in Boise," she said, "but we never dreamed what it would become. We thought it would be here today and gone tomorrow."

When the Boiseans visited Spain, dictator Francisco Franco was ruthlessly suppressing Basque culture. Basques couldn't fly their flag, speak their language or write down their music. The novice dancers had to try to remember the songs until they returned to Boise.

The help of Jimmy Jausoro

"We got together with Jimmy (local accordion legend Jimmy Jausoro) right away because we didn't know how long the songs would stay in our heads," Achabal said. "He wrote down what we could remember. We made our own costumes and started practicing. It wasn't authentic, but it was as authentic as we could make it."

It was authentic enough that their first performance for Boise's Basque community in December 1960 was a hit.

"We were so nervous we didn't know if we were coming or going, but we wowed them," Achabal said.

The performances will continue with more than a year of anniversary observances, beginning with the St. Ignatius picnic Aug. 1-2 (the current Oinkari dancers will perform), culminating with Jaialdi in July of 2010 and ending with a dinner dance in December of 2010 - 50 years after the first group's first performance.

"We're going to try to get all the alumni to dance at one time at Jaialdi," Erquiaga said. "That will be over 700 people."

Though two of the original dancers now live out of state, all seven - now in their 70s - plan to join in the festivities.

The Oinkari group that taught them their first dances in Spain? It disbanded decades ago. If you were and would like to participate in the group's anniversary observances, contact Al Erquiaga at (208) 853-0678.

(originally published by the Idaho Statesman)