Norma Etcheverry, Argentine poet and author of “Aspaldiko: There is a Place in the World where I have always Belonged” 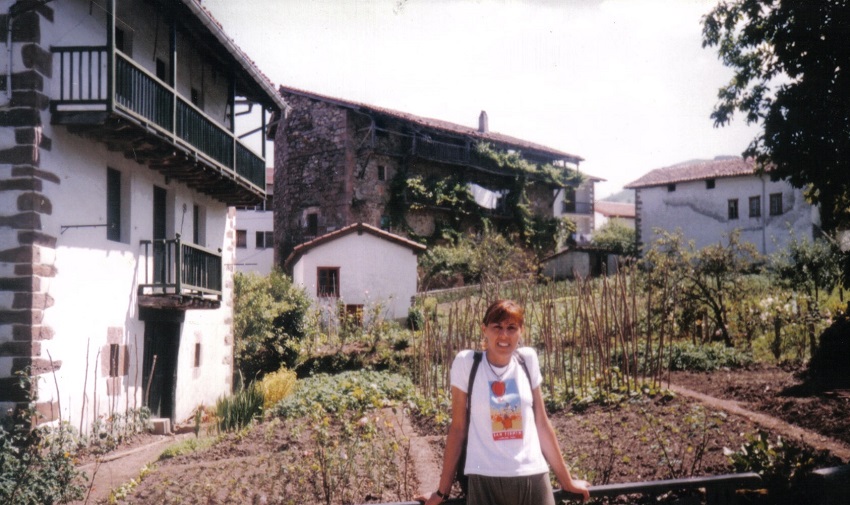 Norma Etcheverry during her trip to the Basque Country

La Plata, Argentina. Nobody doubts the importance of Basque clubs and their role in disseminating the Basque culture.  Even more important, when their task transcends the limits of the institution, the community and the language.  Norma Etcheverry's name has appeared over the last few months in the monthly magazine “Eguzkia,” from the Euzko Etxea in la Plata.  Her contributions include literary criticism, and especially “Poetry of the Diaspora,” a supplement that the magazine published in December 2020.

Norma Etcheverry was born in Ranchos in the province of Buenos Aires, in the heart of a family were Euskera was heard, not so much in order to learn it, but strong enough as to became familiar and not forget it.  Maybe it was following the echo of Basque words in her childhood that took her to the Basque Country for the first time, to Iparralde “where I sensed were the origins of my ancestors,” the writer explains.

“Even if I didn’t have all the information, I deduced that my great grandfather, Esteban Etcheverry, traveled to Argentina on the Orenoque ship at the age of 16 that left from the port of Bordeaux and arrived in Rio de la Plata in 1888.  Later, he married Patricia Igarza, who we know was from Iparralde,” she explained.

This trip to Euskal Herria was for the author, what allowed her “to sow,” the seeds of Aspaldiko, a book of poems that despite being in Spanish talks about Basque themes.  Like those seeds that grow while you water them, Aspaldiko bore new fruit.  The aforementioned “Eguzkia” supplement includes some of Aspaldiko’s poetry, in its original Spanish version and its translation into Basque (see here, beginning page 7).

“I have many concerns and topics that interest me which means that I cannot dedicate myself exclusively to one, as is the case of Basque, which I studied for a year at the Euzko Etxea, but then I had to leave,” explains the author of other poetry books like Máscaras del tiempo (Masks of Time) and La ojera de las vanidades, (The Dark Eye of Vanities), to mention a few. “I am always in touch with the Basque world, with the language and the La Plata Basque club through the magazine and the Matxin Burdin Library,” she concluded.

One of her poems from the book Aspaldiko in Spanish, that she includes with its Basque translation:

(*) Gabriel Aresti. Basque poet born in Bilbao, Bizkaia (1933-1975), author of the poem "Nire aitaren etxea defendituko dut" (I will defend the house of my father)

-Other poems by Etchevery translated into Basque in Poetry of the Diaspora, the supplement to the “Eguzkia” magazine’s December 2020 issue
-Literary criticism of the novel Patria de Fernando Aramburu in N° 13 of Eguzkia magazine