Leonat Egiazabal: “There is a lot of misinformation in the Basque Country about the Diaspora, with a few exceptions” 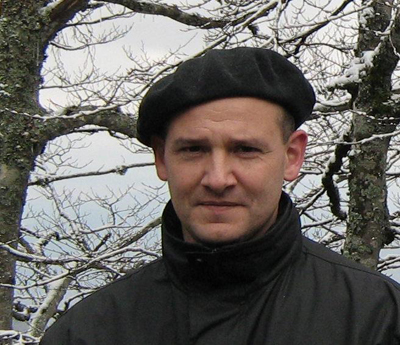 The Uruguayan Leonat Egiazabal is one of the Basques from the Diaspora who is committed to the Basque culture, language and identity. The legacy that he received with greater or lesser intensity from his family has been secured strengthened and made his own to the point of living it in his everyday life, as part of his daily activities in the Rio de la Plata area. He was recently interviewed by daily El Pueblo of Salto.

El Pueblo/Salto, Uruguay.  He has been a History Professor, since 1999 with a degree from the IPA in Montevideo, as well as Basque teacher, one of the three from Uruguay to achieve the EGA title as granted by the Government of Navarre in 2008.

He is currently teaching Basque language classes at the Saltoko Euskaldunen Taldea where he also transmits aspects of the culture that are part of that country.

After living in the Basque Country for a time, Leonat Egiazabal (38), through his joint work, created a cult to the land of his ancestors and recognized that the Basque language is a heritage that must be perpetuated, and not left to die; being one of the most ancient languages in the history of mankind.

- At what age did you become interested in learning more about the Basque Country’s history and culture?

-I became interested very Young…it all began next to the fireplace at my grandparents’ house which had a coat of arms hanging above the chimney.  That is how I started to ask questions, around the age of 5, wanting to know what it meant which led me directly to my Basque origin and from there to its mysterious language.

This remained latent until adolescence…I was always interested but even though I asked my grandmother again and again, she avoided the subject maybe because of old family pain.

When i was 17 I started to study the language and culture by myself, escaping to the college of Humanities at the National Library.

When I was 19 I decided to attend my first Euskera class and since then (1993) I haven’t stopped studying and wondering how it relates to Basque culture, folklore, history and language.

-How were you able to travel to Euskadi and how long did you live there?

-I went there the first time as part of  Gaztemundu, a program for youth in the Diaspora in 1996.  I was then able to get to know the land of my ancestors and confirmed what I already knew, even though I had never seen it before, how important it was for me and how much I loved it.

In 2008, I was able to return to complete my Basque language studies through the Argentinan Euskaraz program that opened the door to me even though I was from Uruguay.  I traveled with a group of Argentinean friends (20 or so) to the Maizpide Institute in Lazkao in Gipuzkoa where we stayed all day studying and living with local Basque families.

I stayed for six months, January to June, until I achieved the EGA, which means Certificate of Aptitude in the Basque Language…then in I spent July and August to visit the country, to get to know the houses where my family came from, to contact relatives, and live the language and the traditions first hand.

What had been dreams became reality: to be in the same room that my grandmother Graziana had left…to go to the mountains with the herders, to try and learn how to play the xirula and the ttun-ttun (traditional instruments), to take some jars of dirt from the family home away in a jar, to hug my distant cousins that were four generations removed from my grandfather and feel at home, to experience the fiestas, and suffer what this people suffers on a daily basis: ignorance and disregard of their rich culture, defend it in my way with the Basque language in my mouth as my only defense.

It was an extremely rich experience, the places and people I got to know, the generosity that I received (they literally opened their doors to me and the key was always Euskera) and the feeling that I have been able to turn a story around that seemed to be doomed to oblivion.

My ancestors came poor and died poor, forgot their home…but nevertheless they left me Euskera.

With this key I have also opened up my own doors…those that took me to my roots and allowed me to get to know myself.  I was also able to reconstruct the story, from not knowing the name of the town to knowing the name of the house, I learned who lived there and what they did for a living, what their hopes and challenges were, and that’s something.

-What do the native Basques think of those who immigrated to different points on the globe?

-I think that there is a lot of misinformation.  Except for a few, they only know about those who went to Argentina or the US as sheepherders and little more.  They are surprised and admire the fact that their descendants learn Basque and even defend it and its culture.

-According to your experiences and ties to other Basque clubs in other places, is there unanimity in the fight to preserve the language as one of the most important aspects of Basque heritage?

-At least in their speeches, I think that it has been given more importance than before, but there is still much to be done.

-What are your future projects in this area?

-To learn and teach what I can, by all the means that I can.  Making people aware that Euskera is the first symbol of Basque identity.

-What are the dynamics of the Basque club in Montevideo?

-Not what I would like them to be…it’s poor…I have seen the Basque community disappear…I refer to the Basque who came to Uruguay, today all that’s left are their descendants.  I saw them, got to know them, ate, sang, played mus and spoke Basque with them.

I also learned from them and saw them leave forever.

Today’s descendants haven’t had that contact with the native Basques and the Basque is now quite blurred.  Not much study exists, but instead many stereotypes and the activities are not well attended.  It is the general phenomenon in Basque centers in the world today.

I believe that the challenge lies in the study…wanting to work and to generate consciousness in the thousands of Uruguayans of Basque roots that they can recuperate their history like I did, for their personal enrichment and for the good of Euskal Herria.