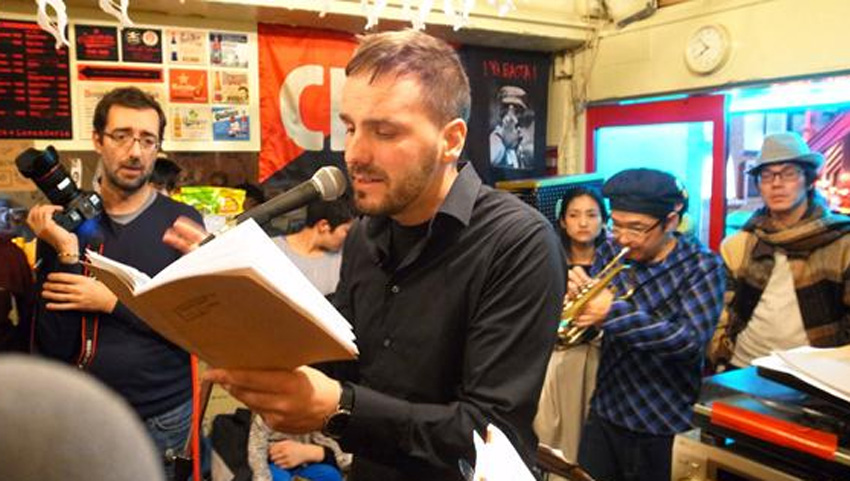 The next novel by Kirmen Uribe (Ondarroa, Basque Country 1970) will be published simultaneously in four languages: Basque (Susa), Spanish (Seix Barral), Catalan (Editions 62) and Galician (Xerias).  The work is entitled “Elkarrekin Esnatzeko Ordura” (Time to Wake up Together) and tells the story of the agitated life of musician Txomin Letamendia, Basque Government spy during the Second World War, and his wife, Karmele Urresti.  Uribe was inspired by the painting by Antonio Gezala, in 1927, entitled “Night of Ibaigane Artists".

Bilbao, Bizkaia.   The latest novel by young Basque writer, Kirmen Uribe was inspired by the paining that the Museum of Fine Arts in Bilbao acquired in 2008.  It is called “Night of Ibaigane Artists” and was painted in 1927 by Antonio Gezala.  The painting reproduces a typical evening in the 20s, where guests drink and dance to the rhythm of a jazz band, that included trumpet player, Txomin Letamendi.

Specifically, Letamendi is the novel’s protagonist, along with his wife Karmele Urresti.  Letamendi played with prominent musicians as Ravel and Rubinstein in the Bilbao Symphonic Orchestra, and at night he had his own jazz band.  He traveled much and also went to New York to play in his youth.  But when the Civil War broke out everything changed.

Letamendi was named captain of the Republican Militia and after the fall of Bilbao, he is exiled to France, where he meets his future wife, Karmele, who is also in exile. Both were part of the Basque cultural embassy who traveled through Europe looking for support for the Republicans.  Just before the fall of Paris, the pair fled to Caracas, Venezuela.  There, Txomin Letamendi was recruited by Basque president Jose Antonio Agirre for the Basque Secrete Service that at that time collaborated with the United States and the OSS.

The family returned to Europe during the Second World War, and Letamendi spied on the Nazis, until he was arrested in Barcelona where he was tortured and died; his body was never recovered.  His wife decided to return to Venezuela and left their three sons with their grandparents.  She never returned to the Basque Country until the death of Franco.

Kirmen Uribe (Ondarroa, 1970) is, according to critics, one of the most important writers of his generation.  His first novel, Bilbao-New York-Bilbao achieved, when he was 39, the National Literary Prize in Spain, confirming him as one of the most interesting and original authors, not only in Basque, but also within the framework of Iberian Literature.  His novel has been translated into a dozen languages including Spanish (Seix Barral), French (Gallimard), Japanese (Hakusui Sha), and English (Seren Books).  It was elected by Foyles as one of the 15 top books in the United Kingdom in 2014.

His second novel, Mussche (What Makes the World Go Around)), written in the US, has been also translated into several languages, including Chinese and Japanese.