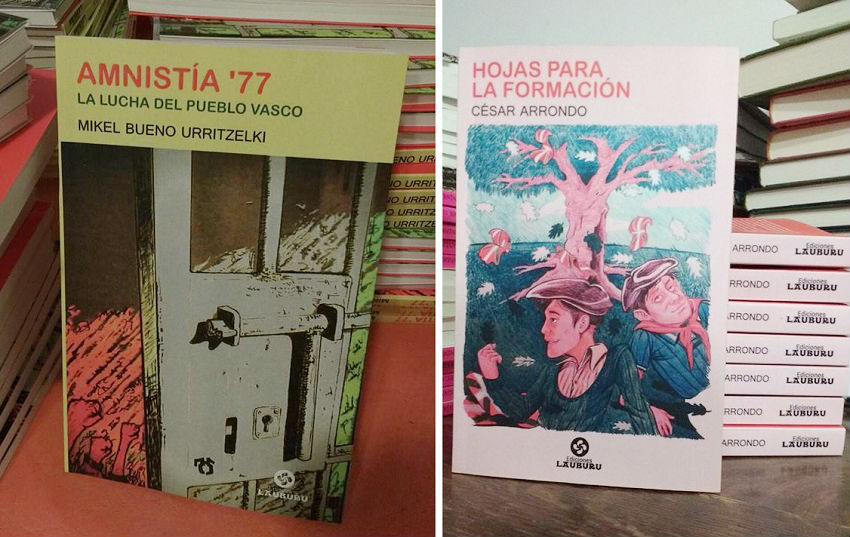 The Publisher created in Argentina at the heart of the Arturo Campion Basque Studies Center has published two new titles, Training Pages by Cesar Arrondo, and Amnesty ’77 the Struggle of the Basque People work completed for his Masters by Mikel Bueno Urritzelki at the Public University of Navarre.  Both books are added to the works published by the young publishing house last year and are now available to interested parties.

Laprida, Argentina.   With just one year of experience, Lauburu Publishers is working hard to complete its main goal: to become a channel to disseminate research on Basque themes that take place in Argentina.  This year, however, they exceeded the geographical limits since one of the works published is from Pamplona by Mikel Bueno Urritzelki; more specifically, it's the work that Bueno did to complete his Masters in History at the Public University of Navarre.

Amnesty ’77 the Struggle of the Basque People

As Nicolas Chaves, director of the Publisher, told EuskalKultura.com, Bueno Urritzelki “had collaborated on some articles in Guregandik, the Arturo Campion Basque Studies Center’s newsletter, and that is why we were in touch with him.  When he heard about Lauburu, he wrote to see if publishing his work might be a possibility, and after some talks, we decided to go forward with it.”

Amnistía `77, la lucha del pueblo vasco (Amnesty ’77 the Struggle of the Basque People) is described like this by the author: “The pro-amnesty struggles have not had the historiographical impact which, in my opinion, they deserve.  But it is sure that there are authors that mention them without going into great detail about them.  Others leave them out completely. This seems to indicate that the Spanish transition period was very calm and peaceful and that it was barely contested during the State's reform.  Nothing further from the truth,” he says.

“The transition was extremely violent, at least in the Basque Country.  That is how they talk about events in Vitoria-Gasteiz and Montejurra, evidenced by the dead and innumerable wounded in the various demonstrations that took place, and later the pro-amnesty struggle.  This book talks about the pro-amnesty movements in favor of Basque political prisoners that took place in the southern provinces of the Basque Country at the twilight of the Franco dictatorship.  Amnesty which was established only thanks to the constant struggle of the Basque people, at the high price of several dead and hundreds of injured,” he says.

Hojas para la formación (Training Pages) is the third book by Cesar Arrondo in the collection of Lauburu Publishers.  It differs from the others as this is a more didactic text.  According to Arrondo, “this publication is the fruit of work done in favor of the Basque culture and the political rights of the Basque nation, that began to form 15 years ago, when I was an active part of FEVA, (Federation of Basque Argentine Entities). On occasion of traveling to Basque clubs, I saw that many had formed libraries, but an extra need was appreciated, especially for the youth to be able to access small summaries of research that could be quick reading material to have a first encounter to basic issues of our culture and the political reality of Euskal Herria.  As I said before, I believe that anyone who is part of a Basque club has a duty to know the basics of our culture and political situation.

These titles are now part of the publisher’s catalog.  For more information or to order them contact Ediciones Lauburu sending an email to: nicolasjchaves@gmail.com.

This is the current list of available titles ($ = Argentine pesos)