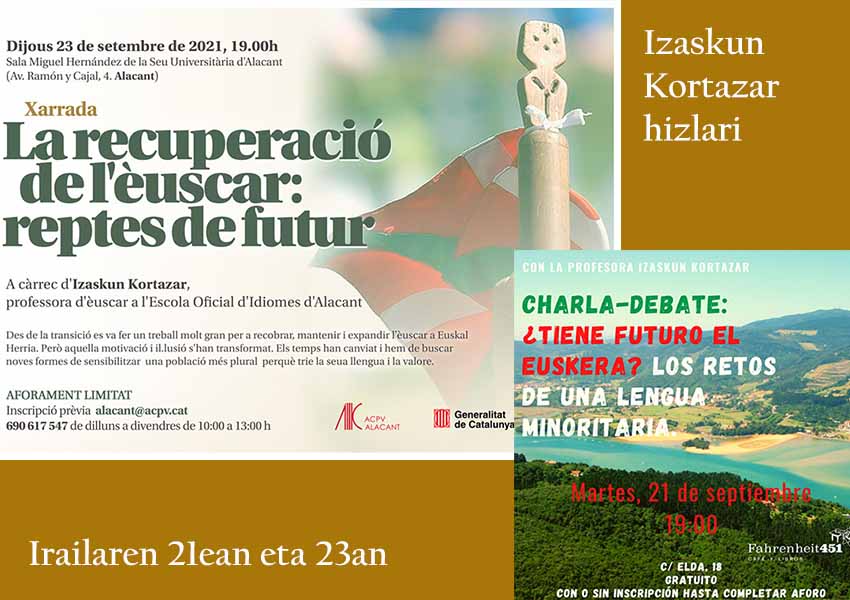 Alacant-Alicante, Spain. Basque professor at the Official School of Languages in Alicante Izaskun Kortazar Errekatxo, will give two talks this week in Alacant about the future of Euskera and the challenges that it is facing.  The first, in Spanish, will take place today, and the second will be next Thursday, in Valencian.  Admission is open although seating is limited.  RSVP are requested for Thursday’s talk by emailing alacant@acpv.cat or by calling 690 617 547.

Title: Does Euskera have a future?  The Remains of a Minority Language
Place: Fahrenheit 451, Café y libros (C/Elda 18), at 7pm
Thursday, Septebmer 23rd

Izaskun Kortazar Errekatxo, originally from Bilbao, is a teacher with extensive experience in teaching languages.  She has a degree in Basque Philology, in Spanish Literature and in Teaching English, she is fluent in Basque, Spanish, English, and Portuguese and has a high level of Valencian/Catalan.  She has been a Basque teacher in the Basque Country and has taught Basque and Spanish in the United States.  She has lived in the US, Brazil, and South America and knows well the world of Basque teaching in the Basque Diaspora where she also served as NABO’s Basque Coordinator.  She currently resides in Alicante where she teaches Basque at the local Official School of Languages.