Itzuli, free automatic translator between Basque-Spanish and vice versa, whose app can be installed on your phone 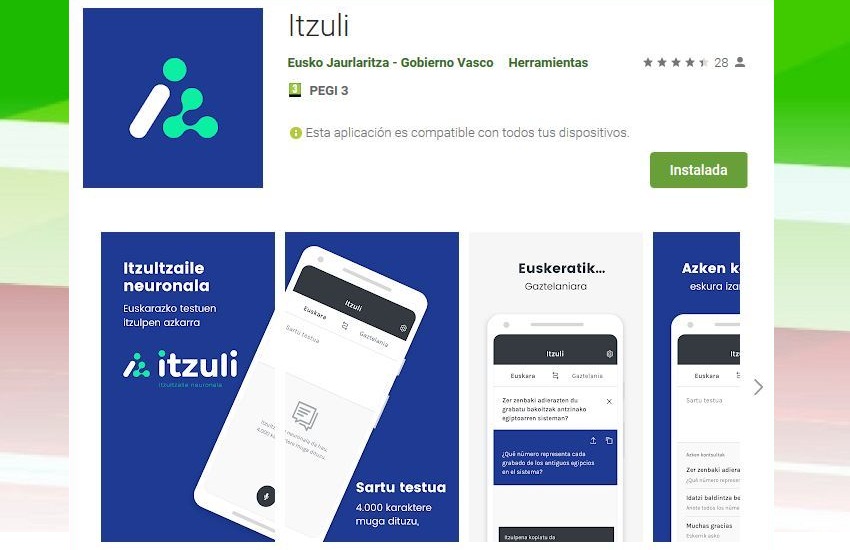 Itzuli, app that provides quality translations for everyone

Vitoria-Gasteiz. Itzuli is an easy to use free neural automatic translator that provides decent quality.  The tool allows you to translate from Basque to Spanish and vice versa, developed by the Basque Government and has been available online since last October.  The app was launched at the end of December and since then, queries have not stopped, testifying to its usefulness in both academic and work scenarios as well as in everyday life. Its Basque to French and vice versa version is expected within this year. And later the English one.

The app can be downloaded free of charge on Google Play or from the App Store. It is easy to use.  All you have to do is select the direction you want to translate (from Basque to Spanish or Spanish to Basque) and include the text you would like to translate.  Click on translate and you’ll get the result in seconds.  Itzuli allows a total of 4,000 characters for each use, although it can be used as many times as you’d like.  The app also provides the possibility to include text via voice recognition.  To use that option, just activate your telephone’s microphone.

This tool, the fruit of years of work, represents a qualitative leap because it functions through neural networks, thanks to artificial intelligence providing translations that exceed the quality of those available to date.  The Basque Government continues to work and announced that soon a Basque-French/French-Basque version will also be available, thanks to collaboration with the Public Office of the Basque Language in Iparralde. It will be followed by an English version.