Friends and members paid tribute to the Toki Eder Basque Club in Jose C. Paz on its 25th Anniversary (video) 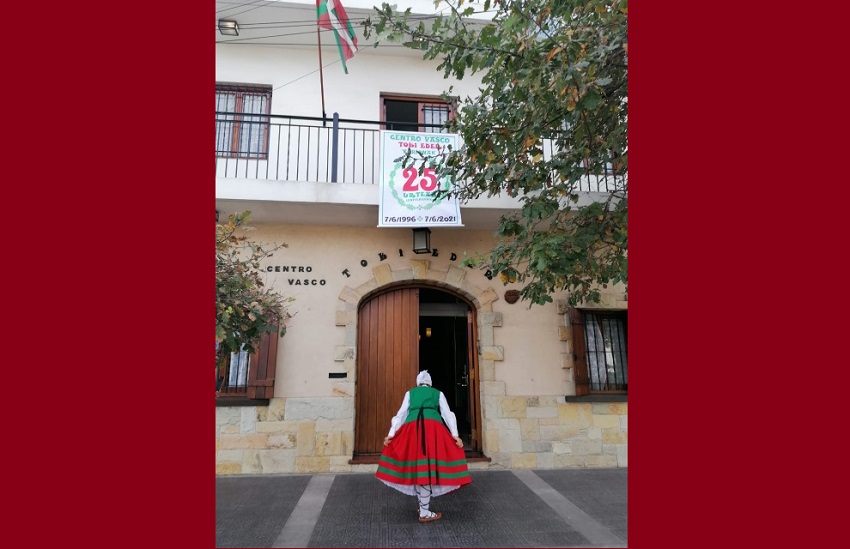 José C. Paz, Argentina. The Toki Eder Basque Club in Jose C. Paz celebrated its quarter century last Monday and did so adapting to the current health restrictions, but with as much excitement and pride as other years. Due to the restrictions brought about by the pandemic, the club decorated its balcony, replicating the façade of a Baserri, with a poster that announced the birthday, and dantzari, Jennifer Cabezas, performed an Aurresku (see video):

Also on the day of the anniversary, club members handed out books to neighbors who passed by the clubhouse, and from the club's literary and Euskera workshops organized by Toki Eder, students presented allusive writings.

In their writings, members of the Toki Eder summarized the club’s history, from its beginning, when everything was yet to be defined, including the name of the club, proposed by Reyes Michelena, to present day, where it has become a benchmark for culture, and Basque solidarity in this area of Greater Buenos Aires.

Thanks to the efforts of Toki Eder, the city of Jose C. Paz became sister-cities with Oñati in 2000, and through the club and the Basque-Argentine NGO, Hermansoloña, created for this purpose,  35 containers have arrive after then to Argentina with donations providing for local needs, including tools and machines to start workshops.  The history of projects carried out and dreams fulfilled has been reflected in articles in EuskalKultura.eus, for example, in this retrospective article that we published on the occasion of the 20th anniversary of Hermansoloña

Zorionak, Toki Eder, and here’s to many, many more!