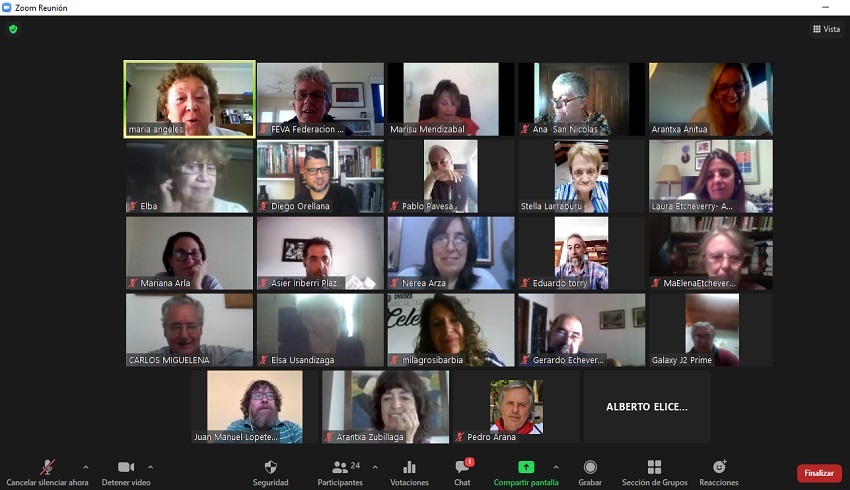 First FEVA meeting of the year held on February 6th

Buenos Aires, Argentina. Looking ahead, the Federation of Basque-Argentine entities prepares a grid of cultural activities that it will host during the year.  President, Arantxa Anitua, explains in a conversation with EuskalKultura.eus, that “we will continue to work virtually at least during the first semester, as we did in 2020; not only because of the health situation, but because this modality has been absolutely beneficial for FEVA.”

“Last year we tried it, and despite the adversity caused by the pandemic, going virtual opened up an entire field of possibilities for the federation, including what we’d like to highlight, the generation of more and new content that reaches more clubs.  It allowed us to carry out a more federal operation and even open the doors to institutions in neighboring countries,” Anitua stressed.

To complete the 2021 cultural activity grid, FEVA invites clubs to send in their proposals, explaining what the activity includes, who is in charge of it, and how it will develop.  Proposals will be accepted until February 19th by emailing secretaria@feva.com.ar.

“We will continue to firm up details in the coming meetings and also see the possibility of alternating with some kind of in person event, especially since we are all missing in person meetings,” she confessed.

The first meeting of year took place virtually on Saturday, February 6th.  Some 20 representatives from various clubs attended, and an evaluation of Euskera activities took place including the first Barnetegi of the year, the teachers’ stay at Lazkao (Gipuzkoa) and the organization of the Ordinary General Assembly planned for April began where elections for part of the board will take place.