Conference and presentation of a book about Martin Elorza, Bishop of Moyobamba, in Lima 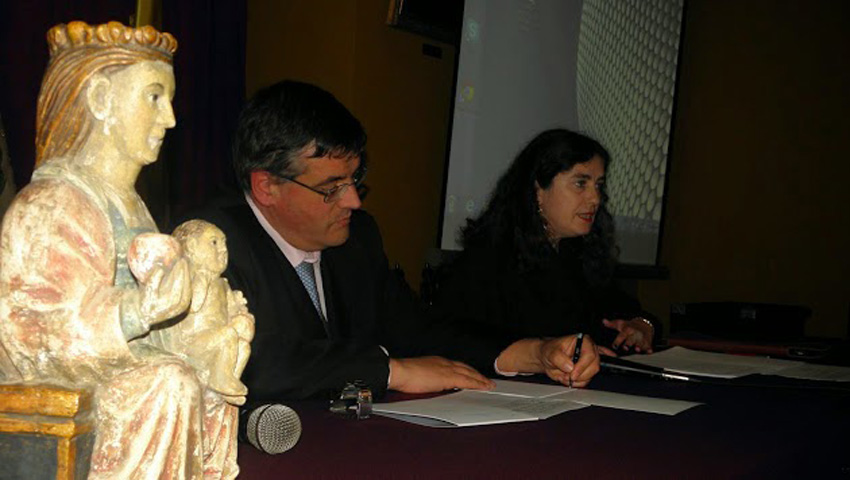 Last week two books related to the Basque Country were presented in Lima, with professors and members of the University of the Basque Country, Deusto University and the University of Navarre present.  The first was on Ezkioga and the other was on Monsignor Martin Elorza, Bishop of Moyobamba, according to a note sent by the organizers.  They are also announcing the presentation of another book, in March, by Josu Legarreta, on Basque-Peruvian, Francisco Igartua.

Lima, Peru.  The note sent by Jhon Bazan, coordinator of the Editorial Fund of the OIga Magazine, founded by journalist, Francisco de Igartua, reported the participation last week of a delegation comprised of members of the University of the Basque Country, Deusto University and the University of Navarre, in various academic activities on the San Martin de Porres University campus.  The campus also boasts a sapling of the Tree of Gernika that was planted in 2012 to commemorate the 400th anniversary of the foundation of the Basque Brotherhood of Arantzazu in Lima.

There were two books presented.  The first Ezkioga by Dr. of Theology, Antonio Maria Artola Arbiza, was presented in Lima on December 3 even though it had been published in the Basque Country in 2013.  The second was a work on Monsignor Martin Elorza, Basque priest who was the Bishop of Moyobamba, written by Fr. Artola and historian, Oscar Alvarez Gila from the University of the Basque Country.

These activities will continue in March with the organization by the Editorial Fund of the Oiga Magazine of a tribute to commemorate the 92nd birthday of its founder, Francisco Igartua, to be attended by Josu Legarreta, former director of the Basque Government’s department of Basque Communities Abroad, who was also a personal friend of Igartua and who managed the presentation of his autobiography Always a Stranger at Deusto University in 1995.

Legarreta’s book will be edited in Colombia, by the Oveja Negra editor, with the help of the Euskal Etxea Foundation in Bogota.  It is a collection of personal memories and world travels in order to contact the Basque communities, mainly the ones in Latin America.  Attendees of this presentation will include representatives of the University of the Basque Country and the San Martin de Porres University, along with others from Oveja Negra.  The Santiago Basque club in Chile and the Arantzazu Basque club in Lima will also participate as sponsors, the note concludes.