Class at the UBA: “Basque Immigration in Argentina: A Construction of a Diasporic Identity?” 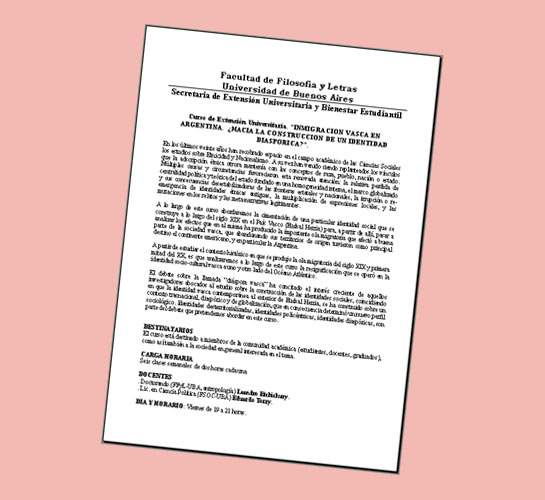 A new class has become available at the University of Buenos Aires (UBA). “Basque Immigration in Argentina: A Construction of a Diasporic Identity?” The Class will be available starting August 20th, and during 6 weeks, students will study and discuss about that at the Philosophy Faculty of the University of Buenos Aires. The course will be taught by Leandro Etchechury (Anthropology) and Eduardo Torry (Political Sciences), every Friday from 7 to 9 pm. There will be no sign up fee, and students will be able to register for the class until July 31st in the University Extension Offices.

Buenos Aires, Argentina. In the past twenty years, social studies have made way for ethnicity studies, as well as nationalist studies. At the same time, the links between ethnicity and concepts of race, city, nation or state have been reinforced. Multiple causes and circumstances favor this new focus: the relative loss of political centrality, the theory of the state funded in an internal homogeneity, the global identity and its various consequences on state and national boundaries, the re-emergence of ancient ethnic identities, the multiplication of local expressions, and the change in relation and legitimate meta-narratives.

Throughout the course, we will study the foundation of a particular social identity that constructed along the 19th century in the Basque Country (Euskal Herria). Furthermore, we will analyze the effects that at the same time have produced waves of migration that affected a huge part of the Basque society. Various Basques abandoned their territory and land in exchange of their new destination, the Americas, in particular Argentina.

After studying the historical context that produced the migration wave in the 19th and early 20th centuries, we will analyze the redefinition of the Basque socio-cultural identity from one end of the Atlantic Ocean to the other.

The debate over the so called “Basque Identity Dispersion” has stirred up interest in several investigators specializing in the study of the construction of social identities. They agree that in modern Basque identity outside of the Basque Country, there has been a construction of a transnational, globalizing context that in turn has created a new sociological profile. Deterritorialized, polycentric, and diasporic identities have become part of the debate that we will discuss throughout the course.

Availability:
The course is set for members of the academic community (students, teachers, graduates), as well as the general population interested in the topic.

Meetings:
Six weekly clases of 2 hours of each class

Days and schedule:
Fridays from 7 to 9 pm, beginning August 20th