Chile champion of Mercomus 2013, after a week of games, activities and great atmosphere in Lima 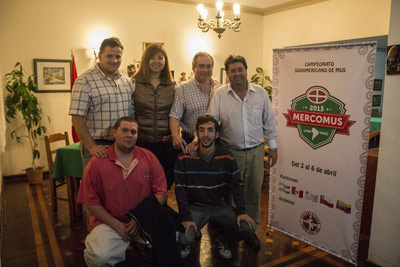 The Mercomus 2013 mus championship, organized by the Euskal Etxea in Lima, ended last Saturday after intense days of activities and competition. Chile´s team was the victor, comprised of Jorge and Lukas Oyarzun (father and son). Second place was taken by Argentina’s team Jose Luis Macchi and Rolando Biasco, while third place went to hosting team Jose Luis Lopez and Carlos Lombardi (champions of the 2012 edition held in Santiago, Chile).

Lima, Peru.  The Mercomus 2013 tournament left a good taste in the mouths of its organizers and participants, who enjoyed several activities that allowed them to get to know the city of Lima better as well as Peruvian culture.  The Euskal Etxea in Lima shared a chronicle of the event with EuskalKultura.com.

The tournament began on April 3 with a welcome reception for the mus players, delegates and companions at the Basque club in Lima, which included player registration and then a cocktail sponsored by the club.

The next day, participants began the day with a tour of the city of Lima, visiting historic and touristic spots. At noon, they were served lunch at the casino de Miraflores, with a beautiful view of the bay that covers the beaches of Miraflores, Barranco and Chorrillos.

That afternoon they started playing mus at the Basque club. “At the end of the day Peru’s and Chile’s teams competed, comprised of Jose Luis Lopez and Carlos Lombardi and Jorge and Lukas Oyarzun respectively,” organizers said.  “That night, a very well-attended dinner was provided again at the club with dishes made in honor of the muslaris who came from various clubs in South America.” Games continued on Friday, and the competition became more serious: “Besides the aforementioned teams from Peru and Chile, the Argentinean team came out strong as well, comprised of Rolando Biasco and Jose Luis Macchi.”  That night participants enjoyed a dinner of oriental and Peruvian fusion at the Club de Regatas in Lima.  Afterwards, they visited the club, which includes three beaches, a coliseum, handball courts, and other sports, especially water sports. Competition continued on Saturday, the final day, with games played morning and afternoon with a mid-day break, during which muslaris, delegates and companions as well as the board of directors of Lima’s Basque club traveled to the Hacienda Los Ficus, in the valley of Lurin, south of Lima.  There they were served a buffet of Peruvian dishes, and in the afternoon one of the most successful activities of the tournament took place.

After eating, participants went to a “really impressive,” exhibit of Peruvian Paso horses, according to organizers.  “The program included the history of this Peruvian horse with a presentation of different stages of training: foals without tools, bridled foals, later samples with complete outfitting, fishing dance from northern Peru by a horse and a cute dancer.  After the show called “barrida,” which is a formation of paso horses which led by skillful riders, perform various maneuvers.  After the show, several muslaris had the opportunity to ride the horses and enjoyed their smooth and quick gait.” The Basque club was the scene for the awards ceremony. The event opened with club president, Raul Noblecilla, telling the story of the reintegration of Lima’s Basque club in mus tournaments since the World Championships held in Los Angeles in 2010.

Then leaders of the various Basque clubs addressed those present, and finally trophies were presented to the winners.  As a farewell, all visitors were given beautiful silver pines in the shape of the Lauburu donated by Martha de Ortuzar, and event t-shirts. [Second place winners, a team from Argentina, during the awards ceremony (photo LimaEE)] [The Board of Directors of Lima’s Euskal Etxea, awarding the third place trophy to representatives of Peru (photo LimaEE)]

The Euskaletxea choir also performed at the ceremony singing Boga Boga, Txoria Txori and Agur Jaunak that were enthusiastically welcomed by those present.  The championship ended with a dinner “where the enthusiastic diners would spontaneously break into song singing tunes such as Boga Boga, Maite, Santurce a Bilbao, Maitechu, and many more,” according to club sources.