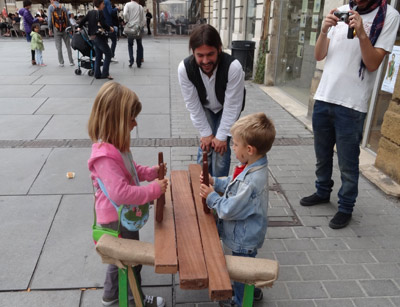 Members of Bordeaux’s Basque club were very satisfied with their participation in Heritage Days held September 16-18, in the French city. Eskualdunen Biltzarrra took Basque culture to the streets and involved many people in its activities: cultural workshops, dance, talks and a photo exhibit. There was even a trio of txalaparta players from Pamplona, Hutsun, and their exhibitions aroused the public’s curiosity, who was also encouraged to participate in the workshops that introduced them to the ancient instrument. There was even a group of Basque people among them who were passing through. “Hopefully they’ll become members of the club!” commented David Mugica, club president, to EuskalKultura.com.

Bordeaux, France.  September marks the time of year when many French cities celebrate Heritage Days, and like every year, Bordeaux’s Eskualdunen Biltzarra joined the celebration organized by city hall from September 16-18.  The Basque club began its festival program on Friday the 16th with a talk by Cristian Laprerie on the history of Basque music at the club’s headquarters.  “Forty people attended, and all found the talk very interesting.  Then we made a toast, and following tradition sang songs and there was great atmosphere.” David Mugica, club president, told EuskalKultura.com in Basque.

From Friday to Sunday the Basque club showed the exhibit, “Basque Music,” in which twenty-one photos invited visitors to get to know traditional Basque instruments like the txistu, txirula, txalaparta, alboka, trikitixa and so on.

On Saturday and Sunday the Basque club had a stand in the Pey Berland plaza, along with other city associations.  “There we offered cultural workshops, for example, games about the Basque language, and also shows: every morning the kids dance group performed, and in the afternoon we had a cultural workshop with our group Xitoak.  On Sunday afternoon our choir Bestalariak performed; finally the sun came out and we were able to sing for all the visitors,” said David.

Among the activities that really caught the public’s attention were the demonstrations and workshops of the txalaparta group Hutsun from Pamplona.  “We just finished beginners workshops for children and adults and it was worth seeing the effort that the children put into playing the boards,” David explained.

In the afternoon the group gave a concert and the sound of the txalaparta attracted many curious people to the Basque stand.  “Those passing by the plaza were dumbfounded and very attentive: it was a great success.  When the concert was over, many didn’t waste any time in getting closer so that they could play this instrument that was so exotic to them,” Mugica added.

The event accomplished its goal and many spectators asked about the txalaparta as well as about Basque and the club. “It should be noted that a group of Basques, who didn’t know about the euskal etxea, also approached us to find out more. Hopefully they will become members of the club!” concluded the satisfied President.