Berlin 1937-2020, simple but emotional tribute and floral offering marking the 83rd anniversary of the Bombing of Gernika 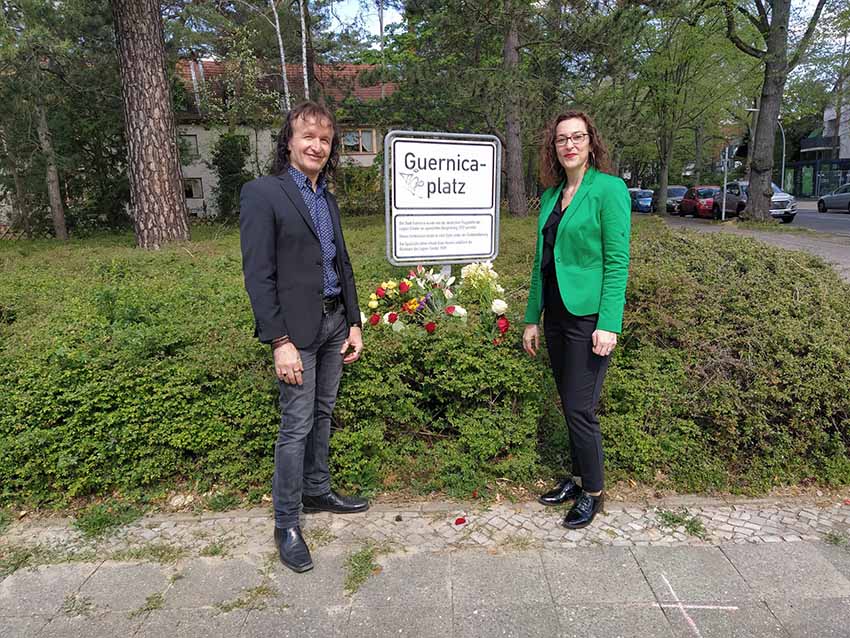 The president of the Euskal Etxea in Berlin Ainhoa Añorga, with her husband Atilla Özer in the Guernica Platz after the ceremony

Berlin, Germany. As previously published on EuskalKultura.eus, authorities in Berlin authorized the annual commemoration organized by the local Euskal Etxea in the Guernica Platz marking the anniversary of the Bombing of Gernika.  Respecting social distance and adopting the precautionary measures in place, the ceremony included the reading of a poem, an address in Basque and German, as well as laying a wreath to the music of a cello.

Participating in the event were the president of the Basque club, Ainhoa Añorga, as well as club members, the vice-mayor of the District of Zehledorf, Michael Karnetzki, the delegate of Catalonia in Germany, Marie Kapretz, the director of culture at the Spanish Embassy, Juan Manuel Vilaplana, and members of the KFSR, as well as other members of the Basque community and guests, filling the quota at 12 people.

The event was streamed on Facebook.  This annual tribute held annually on April 26th has been organized by the Gernika Kulturverein Basque Club (Berlingo Euskal Etxea) since even before it became a Basque club, gathering Basques and a large number of German friends, showing their solidarity and empathy for the victims of the massacre as well as for the Basque people in general.