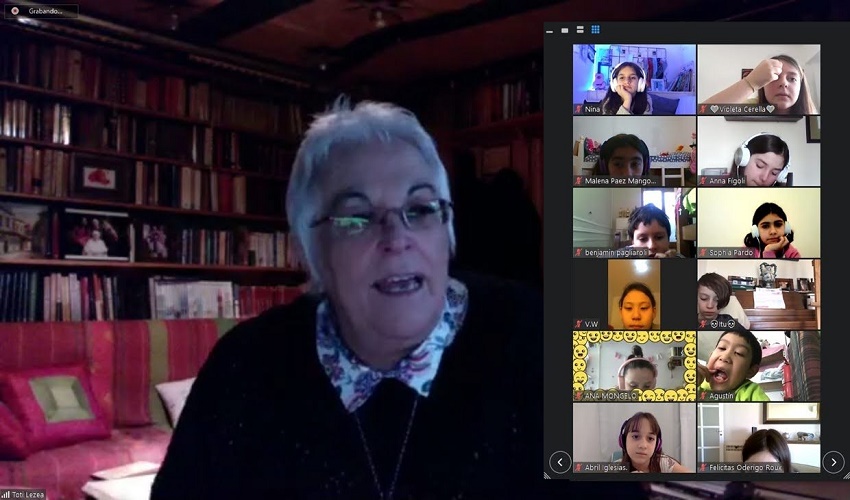 Buenos Aires, Argentina. Invited by the Department of Basque Language and Culture, Toti Martinez de Lezea gave various virtual talks from the Basque Country, to students at the Euskal Echea College in the capital city.  At the high school level, the goal of the meeting was to close the thematic unit corresponding to Basque Mythology, in elementary school, after overcoming a “challenge-game with the students,” the writer from Araba related several stories, “at the request of the public.”

“It was a very enriching experience.  The students didn’t only listen fascinated, but they also asked questions and cleared up doubts about the existence of some of these mysterious characters, especially he sorginak (witches). In addition to telling them about the legend of the Eguzkilorea (sunflower), she showed them one that she had at home with all the details,” Begoña Muñiz, department coordinator, told EuskalKultura.eus.

School during the pandemic

Toti Martinez de Lezea’s talks are part of the virtual proposals that the Euskal Echea College in CABA, specifically its Department of Basque Language and Culture have been offering since the preventive and mandatory quarantine in Argentina began. During the year, in addition to weekly classes taught on Zoom, the following were also carried out, virtually as well:

-‘Euskal Topaketa’ (family event), a cooking class with Itziar Aguirre and a talk by Chef Takehiro Ohno about the curiosities of Basque gastronomy and his experience in the Basque Country.

-Euskal Jaia. Since this could not be held in person, the annual festival was remembered through videos from prior editions with Greetings from various authorities from the community including Gorka Álvarez, Sara Pagola, Arantxa Anitua, María Luisa Álvarez Mugica (legal representative) and Enrique Fagoaga (president of the institution).

There were also classes on Herri Kirolak and in the coming weeks there will be a Pintxo workshop taught by the cooks at the Laurak Bat Basque Club.

2020 has without a doubt been difficult for the centennial college; nevertheless, and as many other institutions and Basque clubs in the Diaspora, they have adapted to the situation.  “We continue to think and work on activities, not just for students but also for the entire Euskal Echea community, since the virtual model allows us to reach more people and the proposals aver very well receive and attended.

“Feelling that the Basque class transcends the walls of the school and arrives to the entire family is very gratifying for those of us who work daily on the diffusion of Euskera and the Basque culture,” Muñiz said.