Basque groups, Belako & Liher: When a virus that seems far away alters and ruins your tour abroad 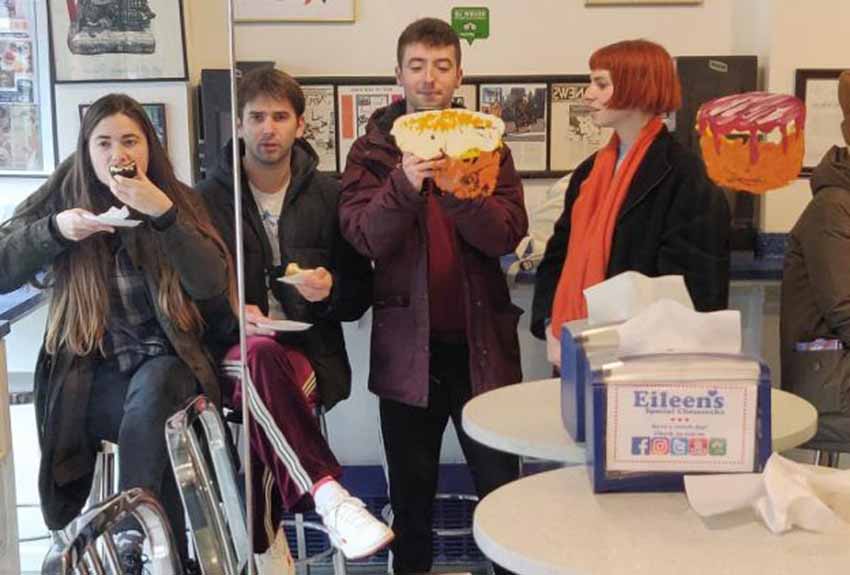 Lore, Josu, Lander and Cris, the four members of Belako, in a pastry shop in New York (photo Belako / DV)

Belako only performed one concert of the nine planned in the US and Liher performed four of the six in Switzerland and Germany.  The situation created by Covid-19 has disrupted the lives and plans for many.  For Belako and Liher that happened while they were touring the US and Europe, respectively.  At least they were able to return.  Juan G. Andres talks to them in the pages of El Diario Vasco in the interview provided below.

Juan G. Andrés. Cancellation, suspension, postponement, return ... They are the most recurring words these days in a musician's dictionary as well as other people in show business. COVID-19 has closed stages in half of the world and thousands of bands are suspending their activity. Some such as Belako and Liher have even had to abandon international tours, with all that this implies including economic disorder and damage. In dark moments like these, they only see one solution: "adapt" and weather the storm in the best possible way.

In the case of Belako it was especially bloody, with nine concerts planned in the US, out of which they were only able to perform one in New York before having to return home in Saturday the 14th.  "We arrived when Trump announced the flight ban and the uncertainty began.  Things began to be cancelled and we saw ourselves trapped without knowing if we could get home, but then we saw an opportunity to change our tickets and return ahead of time," Lander Zalakain explained, drummer from Tolosa, the only Gipuzkoan in the quartet from Mungia.

Lander Zalakain, Belako
"We have a huge desire to play and when the ban ends, no one will be able to stop us"

Lide Hernando, Liher
"I hope people keep wanting to enjoy their free time and go to concerts when all this is over"

Besides various gigs in the city of skyscrapers, they were also planning to return to the South by Southwest Music Festival in Austin Texas, "the largest music international fair in the world. "The US tour was going to be the official presentation of the quartet's album "Plastic Drama," that will come out on May 8th.  Before this date, they were planning eight concerts in various cities in Spain that have been also cancelled.

"This is pretty serious trouble, », said Zalakain, since four members of Belako are self-employed and live off the group's income. «We had spent a lot on flights and hotels, and those concerts were going to be our salary for several months after some time away from the stage.  Now we don't know whether to deregister as self-employers or wait to see if the government removes the quota so that we can resist," aware that "there are people who live day to day and their situation is even worse.  We can hold on a little longer," he adds.

All that is left is to "adapt" and refocus on launching the album that includes the single "Tie Me Up," on its cover.  A few days ago, they spoke virtually, each from their own residence, with their fans and every Friday they will advance a new title.  «We really want people to listen the new songs", the drummer said not denying the desire to be on stage; "We cannot wait to play, but now it the time to be responsible and face the virus."

"It was a big blow that will leave a big bum, but we will get ahead.  We have a huge desire to play and when the ban is lifted, no one will stop us.  Our intention is to fight as hard as we can," Zalakain said, who sets his sights and his hope on several confirmed dates, some in the United Kingdom beginning in May:  Brighton, Mallorca, Malaga, Vitoria, Reading, Leeds, Madrid ...

Liher's case is similar, although during their recent European tour the band from Donostia could perform four of the six concerts planned in Switzerland and Germany. "We had to return on Monday the 16th, advancing our return by two days due to all that was happening," Lide Hernando said.  For the group, that launched its third album two weeks ago, "Hemen heresugeak daude," (There are Dragons here) the bad experience was "gradual," since when they left home the coronavirus was "almost a joke," and as the days advanced, "everything was twisting."

Economically, they say that "it is a huge hit," because after investing the group's savings in the album, they had "their hopes deposited in the European concerts, especially on three dates," that would have occurred after their return, one of those last Friday at the Dabadaba hall (Donostia).  The cancellation of these performances will probably result in their not having enough funds to tour in other places like Zaragoza or Barcelona, and so they are foreseeing some "pretty deserted" months.

Unlike Belako, members of Liher have work besides music which will allow them to continue having some income.  Now, the situation will force them to put money from their own pockets into the project that has, until now, been exclusively nourished by record sales, tickets and merchandising.  Along with other confined musicians these days, they will try to negotiate with their landlords, so they aren't charged rent for a rehearsal room that is not being used.

All in all, Hernando considers his "minor damage" compared to that of his manager, Marcos, from Ayuken Management & Productions, a firm that leads Basque bands such as Liher, Cobra and Grises, all with a recent or imminent record. "They have not only cancelled concerts, but also very large technical productions of people like Fuel Fandango or La Mala Rodríguez. Emotionally he is worse off, like many freelancers and small companies, but now he has to move forward. This will last, but not forever. I hope people keep wanting to enjoy going to concerts when this is over," he wishes.

So, after having presented their album in Europe and before at home, the rockers from Donostia do not dare to predict what their first concert in the Basque lands will be. "There is nothing clear, we had several in April and May that we would like not to suspend, but if you neglect it, at this rate the first will be, probably, the one at the Azkena Rock Festival on June 20 in Vitoria," he says of one of the dates indicated for Liher in a 2020 in which they also appear among groups that will accompany La Polla Records in their farewell performance, scheduled for September 26 at the Donostia Hippodrome.