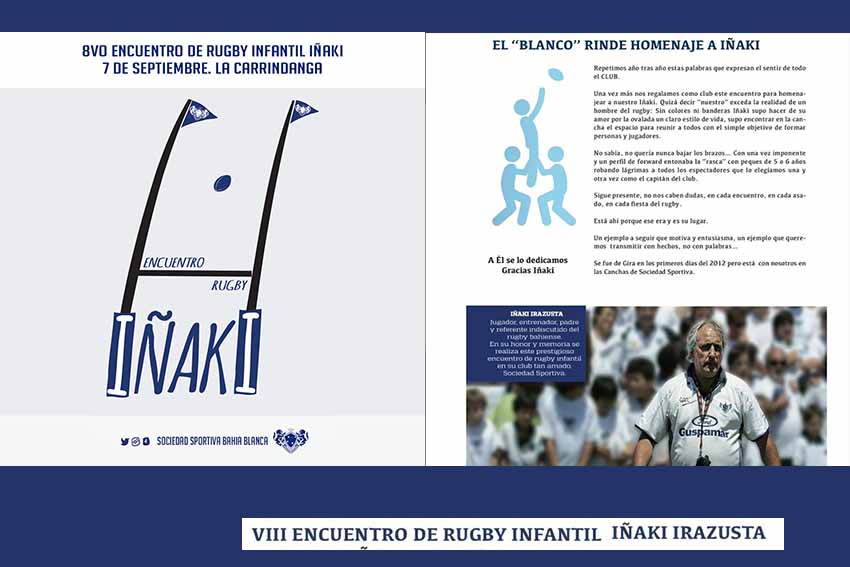 Bahía Blanca, Argentina. Seven years have passed since the death of Iñaki Irazusta de Aguirre in a car accident, but his memory endures along with what he did.  This weekend the 8th Children’s Rugby Gathering organized by the Bahia Blanca Sports Society, will held an event where this Basque spent many hours.  His memory is alive not only in his family, and members of the Basque community, but also in the minds of some 1,000 players and 120 coaches and collaborators who will participate in the event named after him.

“Iñaki Irazusta, player, coach, father and undisputed local Rugby reference.  In his honor and memory we are hosting this prestigious children’s rugby gathering at the club that he loved so. Once again we gift this event to pay tribute to our Iñaki.  We are sure that he accompanies us in each gathering, each BBQ, each Rugby festivity.  He is here because this was and is his place.  An example to follow that motivates and excites us, and example that we want to transmit in deeds, not in words…He left us in the beginning of 2012, but is with us in the Canchas of the Sports Society.  We dedicate this to him, Thank you Iñaki” (from the event’s booklet).

Iñaki was the son of Andoni Irazusta Zubasti and Karmentxu de Aguirre Etxenike.  He was 52 and was a member of the Bahia Blanca Basque Club, as well as a member of the Beti Aurrera and its board of directors.  He was a huge Rugby fan and other sports and he directed the minor divisions.  He was a very dear, healthy and endearing person.  A Basque from the Diaspora that left a mark.  Eskerrik Asko to his cousin and friend Pedro Maria de Aguirre for keeping his flame alive and providing news of the event.