Basque Argentinean Author Fabio Echarri, is interviewed in Gara on his novel Zamacola, a Basque Bandit in the Chaco 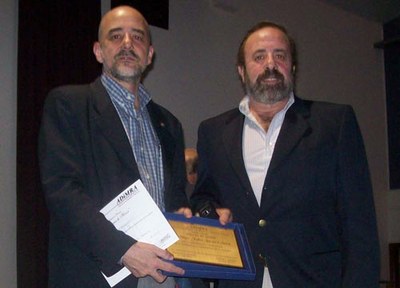 Fabio Echarri, left, receiving the award from the Association of Museum Directors in Argentina in 2010

Eusebio Zamacola’s character has lived for a long time in Fabio Echarri’s imagination. Echarri is a writer, professor and founding member of the Kotoiaren Lurra Basque club in Chaco, Argentina. That Basque who would occasionally visit Echarri’s grandfather, was also a legendary character in the area, a bandit, outlaw and adventurer that never killed or wounded anyone and never stole from the poor. After years of resisting, Echarri finally decided to investigate his life, regardless of what he might find. The result was the novel Zamacola, a Basque Bandit in el Chaco. Journalist Koldo Landaluze interview Echarri in this report in Gara provided here.

Donostia-San Sebastian.  Zamacola, a Basque Bandit in the Chaco introduces us to the experiences of an irreducible character that opted for adventure, faithfully following his particular code of conduct.  From the Argentinean province of Chaco, the book’s author Fabio Javier Echarri, invites us to participate in the adventure starring this bandit who never killed or maimed.

"Euskara was the first language of Eusebius Zamacola Abrisqueta, whose mother taught him to pray the Our ​​Father and that, although not a practicing Catholic, he never forgot." Thus begins the fascinating life course of a basauritarra born March 5, 1904 and whose vital compass led him to star in a journey of no return in the always uncertain territories of adventure. Fabio Javier Echarri - writer, with a degree in History and founder of Chaco’s Basque Center Kotoiaren Lurra (Coyote Country) has continued its wake rooted in popular culture from the same roots of the Chaco.

- in the life journey provided us in .  Zamacola, a Basque Bandit in the Chaco, we find ourselves face to face with a character bordering on legend or created to be in a story.  When did you hear his name for the first time?  What made you write the book?

In the 70s, when I was very young, Eusebio Zamacola used to visit my grandfather at his house in Saenz Peña, in the interior of el Chaco, he lived in a town called Quitilipi 20 kilometers away.  Obviously I didn’t know anything about him or his story at the time.  It would be many years until I internalized the information that came to me from family and friends.

Knowing that I was of Basque origin, something that is emphasized especially on my father’s side of the family, and my association with the Chaco Basque club pushed me to address this topic.  I had been postponing the story of Zamacola; maybe because I wasn’t sure of what might be behind it, until at last I made the decision to investigate his life, regardless of what I might find.  That’s how I did it, and the result was the essay “Eusebio Zamacola Abrisqueta: a man from Basauri in the Chaco of Argentina,” which won the Andres Irujo prize in 2010 by the Basque Government. The book was published on the occasion of the V World Congress of Basque Collectivities and presented in Donostia. This work was the basis of the novel Zamacola, a Basque Bandit in the Chaco and I wrote it because I felt that there were gaps that science could not fill, feelings that I wanted to express…the novel as a literary genre, lends itself to this, and Zamacola deserved it.

Eusebio was Basque, born in Basauri in 1904.  He was recruited by the Spanish army, and served in the French Foreign Legion where he fought the Berbers in North Africa at the age of 16.  Returning to the mainland he was active in the anarcho-syndicalism which earned him persecution during the dictatorship of Primo de Rivera.  He decided to immigrate to Argentina for political reasons and in search of a better life.  He arrived in Buenos Aires in 1924 where he found himself in a similar situation to that in Spain and soon was in trouble with the police. He went to Chaco in 1930.

He committed some misdemeanors in order to survive, but later he became a bandit.  A bandit isn’t a common delinquent: he had principles and a code, and those who followed him had to comply.  He never maimed or killed and he never attacked the poor.  He took on the large companies who exploited their workers and even questioned the police about their abuse and corruption.  This won him the support of the people in Chaco.

To order the book from Txalaparta here: http://www.txalaparta.com/prod/es_es///1///12//2805/Zamacola.+Un+bandolero+vasco+en+el+Chaco.html