As part of its 80th Anniversary, the Lagun Onak Choir shares the stage this Saturday with the Denak Bat Camerata 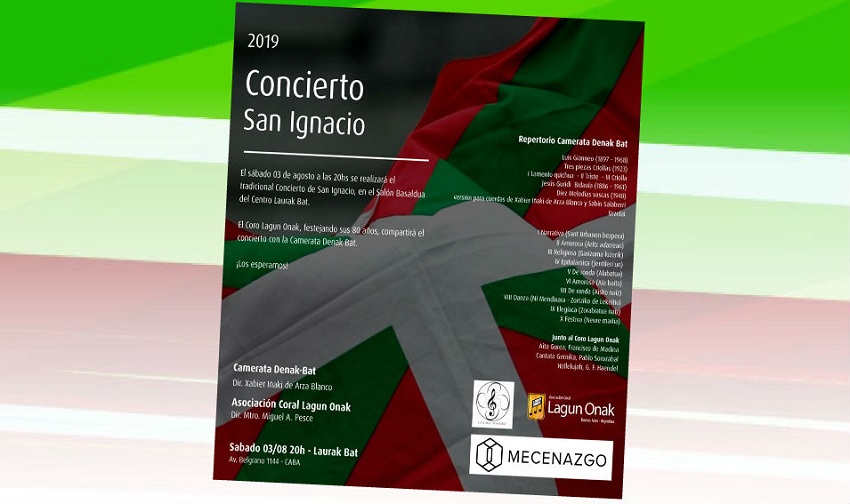 Buenos Aires, Argentina. In the year of its 80th anniversary, the Lagun Onak Choir in Buenos Aires will be part of the San Ignacio festivities this Saturday at the Laurak Bat Basque Club.  They will perform a concert along with the Denak Bat Camerata directed by Xabier Iñaki de Arza Blanco and together will perform a repertoire tht includes classics in Basque like Aita Gurea by Francisco de Madina or Cantata de Gernika by Pablo Sorozabal, to mention a few.

The concert of both Basque Argentine Basque music groups is at the Basaldua Hall at Laurak Bat’s clubhouse Belgrano 1144, at 8pm.  Admission is free and open to the public.

Founded on January 6, 1939 by Fr. Luis de Mallea along with a group of Basques in Argentina, the Lagun Onak Choir has become a reference for choral music not only in the community but also on the national level.

With six albums, awards, hundreds of performances, and directed currently by Maestro Miguel A. Pesce, the Lagun Onak is preparing a full program of concerts for tis 80th anniversary that will include a spectacular finale on December 8th when it will perform in the Buenos Aires Sala Ballena Azul at the CCK.

Following are their upcoming concert dates: