April 26, 2021: Events in several parts of the world commemorating the 84th anniversary of the Bombing of Gernika 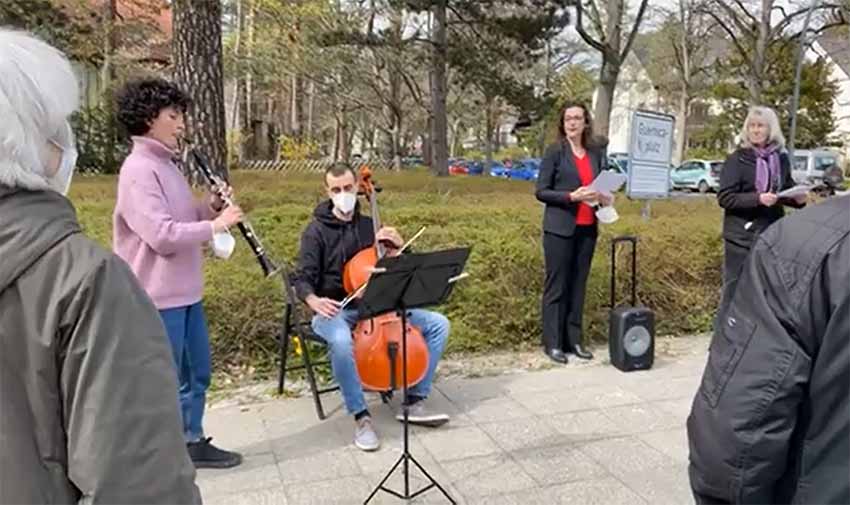 Event to remember Gernika yesterday at the Guernica Platz in Berlin. Today and all week long, there will be many others around the world

Berlin, Germany. Today eighty four years ago, German Nazi and Italian Fascist airplanes, allies of Spanish General Franco, bombed and destroyed Gernika, massacring its population on market day  The bombing of Gernika, a town with no air defense, is considered the first (although days before, Durango was also bombed), air attack against defenseless civilian population.  All over the world, Basques, Basque communities and Euskal Etxeak commemorate the date.  Yesterday, today, but also all week long various remembrances of the event will be held.

With the pandemic limiting attendance, distances and participation, in Euskal Herria Gernika will be the center of the events, with the participation of Gernika mayor and Lehendakari Urkullu.  Among the numerous international events, or in the Diaspora, we highlight and provide here, on behalf of all the others, that in Berlin.  Every year, the Gernika Association in Berlin, today the Basque club in the German capital, organizes an event that many of its founders and Basque and German people will attend in solidarity with Gernika and Euskadi.

The event in Berlin took place yesterday and as every year at the Guernica Platz.  Resecting health protocols, some 30 people attended to remember the massacre of Gernika and its victims.  They read poems in Basque and in German, accompanied by the clarinet by Jone Bolibar and the cello by Mikel Elgezabal who played emotional melodies like “Maitia nun zira,” or “Ala baita,” at an event guided by Ainhoa Añorga and Constanze Lindemann, from the Berlin Gernika Basque club

Yesterday’s event at the Guernica Platz in Berlin.  Live video of the event

“With the current health situation, the mere fact of being able to carry out the event filled us with satisfaction,” club president, Ainhoa Añorga told EuskalKultura.eus, while sincerely thanking those who came to the event in person, as well as those who joined in, or contributed to it.