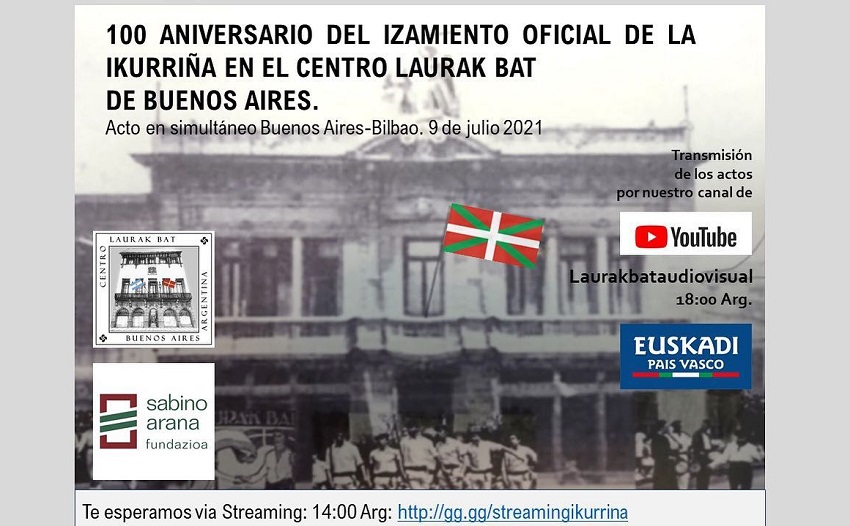 Centennial of the first raising of the Ikurriña in Argentina

Buenos Aires, Argentina. The Ikurriña is the most widespread symbol of the Basque community and today there is not a Basque club that does not display it.  This week it will be celebrated since Saturday marks one hundred years since it was hoisted for the first time at a Basque Club, in Argentina.  It couldn’t be any other way since the first official raising of the flag took place at the oldest Basque club the Laurak Bat in Buenos Aires, that was already, “the most representative social, cultural and recreational organization in the Diaspora.”

The Ikurriña flew for the first time in Argentina on July 9, 1921 to hold witness to the San Fermin Festivities and the Declaration of Independence of Argentina (105 years prior).  The hoisting, which “marked the history and the future of the Ikurriña as a unitary ensign of all Basques,” was a “decisive step for its transformation into a Basque national emblem above all party ideology," says the organizers of tomorrow’s event.

To commemorate the centennial and “value the contribution of the Basque Diaspora to Argentina and the Basque Country throughout history,” the Sabino Arana Foundation and the Buenos Aires Laurak Bat Basque Club have organized a joint and simultaneous event that will feature talks from Bilbao and from Buenos Aires, and that will culminate with the raising of the Ikurriña in both capitals.

Participating from Argentina are José Gabriel Anitua, President of the Laurak Bat Basque Club who will explain the genesis and history of the club and its importance, as well as the Basque community in the South American country.  Gorka Alvarez Aranburu, Director of the Basque Government’s Basque Community Abroad, and Oscar Alvarez Gila, Dr. in History and Professor of American History at the University of the Basque Country will speak from Bilbao

The event will be broadcast via streaming on Friday, July 9th at 2pm in Argentina and 7pm in the Basque Country.  It can also be seen at 6pm in Argentina on YouTube (laurakbataudiovisual) and on its social media.  The streaming link will be provided.